Recently Earnest published a report about rent costs, with the surprising fact (at least for me) that Colorado Springs (where I live) is fourth in the nation for percentage of total income spent on rent. The median rent overall? A smidge under $1400. Do you know what size mortgage you can get for that? 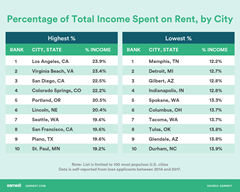 Consequently Colorado Springs is going through a bit of a property shortage at the moment, especially in the up-to-$300K range. Sure, there’s quite a bit at higher prices, like $500K or above, but they tend to stick around for several months before selling. But at that lower price? Not much. The reason: people are finding it more beneficial to buy rather than rent, mortgage rates are still very low, and that means housing in that “first-time buyer” range is being snapped up fast.

So, when we decided to upgrade to a bigger house earlier this year and plonked the money down, we were fairly certain that our old house would not stay on the market very long. And so it proved to be: we moved out, and, after I’d got it redecorated on the inside, had new carpet put in, and a new dishwasher (don’t ask), it was on the market for a mere 6 days before we got an offer. I signed and closed mid-September.

And then a couple of weeks ago I got this postcard, addressed to my new house, about the old one. Remember: I’d sold the latter six weeks prior. 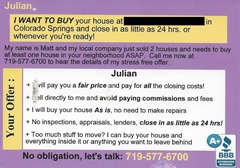 I WANT TO BUY!

First of all, a big jeer because Matt here hadn’t done a little due diligence and pruned out houses like our old one from his data. (I dare say every one in our old street also got a postcard like this, but even so: sending a postcard to address B about address A? You’d think a little more care would be beneficial.)

Second, it did make me wonder about the deal. What would I have sold it for if I could have just walked away from the house, money jangling in pocket? Well, at the very minimum, I suppose what I eventually got for it, less the realtor costs (6%, urk), less the refurbishments costs (in my case, just over $10K), less the odd extra costs (home warranty? sheesh). Obviously, either way, I’d still have to repay the mortgage principal. I look at the number and I think, nope, there ain’t no one going to give me that amount of cash, on the vague hope they’d save enough on the realtor and refurbishment costs to cover the loans they’d have to get, etc.

OK, then, third, what about the cost of my time I’d put in to sell the house? What’s the price for that? Hmm, difficult one. It presumes the situation that, if I hadn’t have been there doing this, that, and the other to help the sale, I’d have been earning money elsewhere. Er, no, not my situation. Hells teeth, writing my book 15+ years ago in my spare time only earned me around $5K from sales, so even writing “Tomes of JavaScript, Algorithms and Data Structures” with zero research (I’d already been there, done that) wouldn’t have made any real difference. (Besides which, virtually no one would have bought it!)

So, all in all, no I wouldn’t have followed up on this, even if I’d received it mid-July when we actually moved into our new home. It didn’t make sense then, and it certainly doesn’t after I’d sold it.

I will note that this is not the only postcard I’d received with this kind of offer. Here’s one I got about a week after closing. 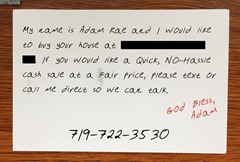 And I’ll note that I’ve been getting them on and off from early 2016.

It’s just a weird capital-intensive business: here’s cash for your house, now go away while I do it up and hope to make enough from the sale to pay myself a salary, etc. Unless you’re great at flipping property (I wouldn’t be…), I just can’t see it being a big earner.