Back in the day, the second calculator I owned was a Commodore SR 4190R, a fun little beast. Once I’d found a replacement for the one I had (it’d got lost at some point) and I’d found an example of its more “experienced” brother, the SR 9190R, I decided to try and get copies of all the similarly-bodied calculators that Commodore had made back in the 70s, maybe half a dozen or so. It didn’t take too long, but there was one of that type that just eluded me, the SR4921. Until earlier this month, that is… 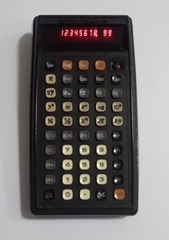 I think the reason that this one was so rare – I’d tried for some six/seven years to find one, even with a saved auto-applied eBay search – was that it is an RPN (Reverse Polish Notation) calculator, and made in England to boot. No equals sign to be seen. I would guess that it was deliberately marketed against the various HP RPN calculators that were out there at the time. But … being RPN meant that it would, in essence, only appeal to the scientist or mathematician. The average person, if they wanted to buy a still-expensive tool like a calculator, would go for a simpler algebraic model.

So a month or so ago, I was bored and decided to browse using my saved search. Nothing, but eBay showed some items from a similar search term. And, knock me down with a feather, there was an SR4921 for sale, where the seller had made a typo and called it an SR4912 (another valid Commodore model number). Holy crap.

Trembling, I summoned up my favorite eBay bidding site and entered an amount for way more than I should’ve. After a couple of days, and ten seconds before the auction ended, the site bid for me and I won.

When I got the calculator, it was in a very dirty, well-used state, so I set about cleaning it. Luckily in doing so the symbols on the keys did not get wiped off, and overall I’m pleased with how it came out. 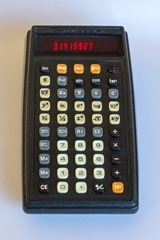 The calculator has a red LED display (like all calculators of the period) with 8+2 digit precision. There are 49 keys, all nicely indented to fit your fingertips, and 27 functions, as well as your typical RPN operation (no need for parentheses!). It uses a 9V battery or you can use a Commodore AC adapter. (A scanned PDF of the manual can be found here.) 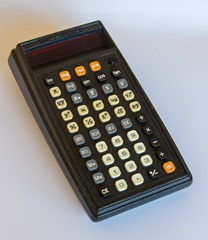 All in all then, a very nice addition – nay, completion – to my Commodore calculator collection.