Just recently I’ve been watching the first series of both Shoestring and Kidnap and Ransom on DVD. The former is a BBC TV series from 1979 and the latter an ITV one from 2011, and both star Trevor Eve.

1979. I  graduated in July 1979 with a BSc in Mathematics from Kings College, London and I started work for real at CAP London that September, programming. £4,200 a year if I recollect properly, and I started on PDP-11s before moving to RPG II on the IBM System/34. I remember watching the series that autumn: great fun, with the protagonist a computer programmer (like me!) who’d had a breakdown and was trying to find his way in life again. He was living in a rented room (hey, I was too!) in Bristol, had a crap Ford Cortina Mark III (ditto!) to drive around in. Finally, he gets a job as private eye at a radio station called Radio West, with a slot describing the cases he was doing, and the TV series was about those cases. 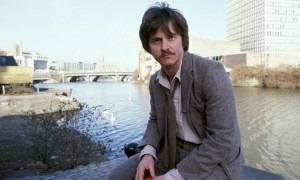 Watching it again at this remove, I’m struck about how good it was. Eddie Shoestring, as played by Eve, was a disheveled, sympathetic character. You cared about him, laughed with him, and winced when (as?) he was inevitably beaten up every episode. And, damn, it didn’t half reflect its time and place: from 32 years away, I’m overwhelmed with nostalgia. There were some scenes which I vaguely remembered, but as a whole it was like watching it completely anew. I’d completely forgotten the doodling he did, ostensibly to get over his depression. I remembered Michael Medwin as the station boss, Liz Crowther as the receptionist, and Doran Godwin as his girlfriend/landlady/handy-solicitor-to-move-the-plot-along Erica, but most of all I remembered Trevor Eve as Eddie.

I’d also ordered Kidnap and Ransom, mainly because Waking the Dead was no more and this new series (about which I’d heard nothing) again starred Trevor Eve. Eve plays Dominic King, a hostage negotiator, and the three part series covers a hostage situation that goes wrong and that suddenly becomes more tricky than at first glance. The biggest problem with this series is that King looks too much like Inspector Boyd of Waking the Dead (which towards the end was getting very tedious). Despite myself, I was expecting a typical Boydian explosion at any moment. I have absolutely no idea why the director didn’t change Eve’s friggin’ hair style at all: it’s grey and swept back, just like Boyd’s. The plot was OK, not bad, and I dare say I’ll buy the second series when it becomes available. But, really, it was a Trevor Eve vehicle and must be judged by that criterion.

So, two series with Trevor Eve, 30-plus years apart. I admit I do like him as an actor (and he is married to the rather wonderful, beautiful and fragile Sharon Maughan which is a major bonus point in his favor) – and, after all, I did watch all 9 series of Waking – and he’s very good in both these productions. Nevertheless I don’t see K&R being as powerful and long-lasting a presence as Shoestring.

Why? I think it goes back to that reflection of time and place. Like The Sweeney with its firm placement in West London or Inspector Morse in Oxford, Shoestring reveled in being in its milieu. Sometimes you were thrown into the city of Bristol or Bath, sometimes thrust into the West Country. The city landscape was suitably pre-refurbished, the countryside was glorious. You felt as if you knew it, as if you belonged. It was plausible. You could imagine the basic plotline working (yeah, a radio station private detective bombing around in a Ford Cortina estate, sure, that sounds OK) and the rest just falls into place. The only naff episode in the first series for me was the Toyah Wilcox one, because it seemed to be shot more as a Toyah episode rather than a Shoestring one.

For me, the same didn’t happen with K&R. Oh yes, we saw King’s nice house with the nice view (but we only saw the same shot of the pad, and the same shot of the view, with no way to locate it somewhere in England either visually or in the plot/dialogue), and we saw a couple of shots of shanty towns in South Africa, but there wasn’t the same sense of place. Don’t get me wrong: beautifully filmed, but rather generically.

And in the end, I suppose it comes down to this. It’s just too easy to see myself and my life in the characters Trevor Eve plays. 1979? Sure, I was semi-broke all the time, living in a bedsit, simple life, with a Cortina to get me around. 2011? Yep, seen it all, getting tired of the bollocks, nice car, no real money worries, sophistication. So, what’s it all about? Shoestring’s freedom versus King’s strait-jacketed life. Sounds about right.

Now playing:
The Go-Go's - Our Lips Are Sealed
(from 200 Cigarettes (Soundtrack from the Motion Picture))