OK, this one is going to be short, because quite honestly I cannot follow the proof in detail at all. Either I don’t have the required continued fraction mathematics, or I can’t follow advanced calculus proofs any more. Probably option C: all of the above. For a quick refresh of what continued fractions are, see here and here. 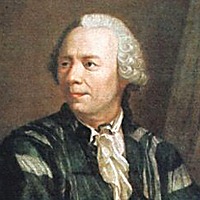 Leonhard Euler was – quite possibly – the greatest mathematician who ever lived. If not the greatest, he and Gauss could at least duke it out for the top spot. Clifford Truesdell, a historian of science and mathematics, had this to say: “in a listing of all of the mathematics, physics, mechanics, astronomy, and navigation work produced in the 18th century, a full 25% would have been written by Leonhard Euler.” So, he’s, like, way up there.

One of the results Euler proved was that e, the base of natural logarithms, 2.718281828…, was an irrational number. That is, e cannot be expressed as a fraction p/q where p and q are both whole numbers. And he proved it using continued fractions.

He found not only that particular expansion for e, but also this one: