GraffitiCMS to be released as open source

Scott Watermasysk of Telligent has just announced on Twitter that GraffitiCMS (the CMS engine behind this blog) is going to be released as open source on December 11: 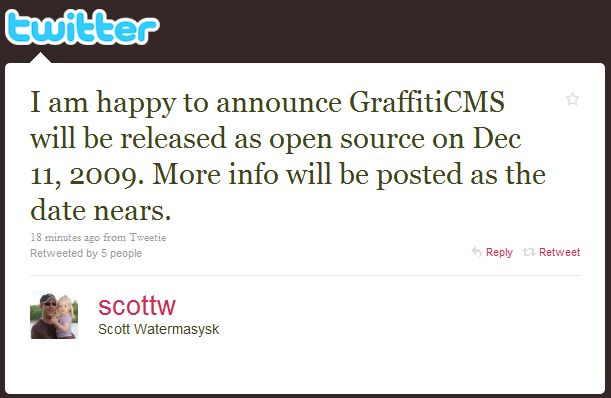 First: thank goodness they've decided to do something with the product. I would have preferred, perhaps, that they added new features and functionality and brought out a new "closed" version, but this is a good second best. I wonder if they'll be using codeplex for publishing it.

Second: I wonder if what they do release as open source has some of the things they've been working on, or whether it will just be the latest current version, 1.2. Either way, I don't particularly care: I know what I want to add to GraffitiCMS, and this will be my opportunity. (I also know where some bugs are, so I'll be able to finally fix them instead of waiting around.)

Third: part of me hopes that they keep the GraffitiCMS.com site up. There's some good information in the forums for example (as well as the "documentation", such as it is). It'd be a shame to lose it.

Fourth: GraffitiCMS uses some third-party components. I would imagine that, in order to recompile the product, we shall have to purchase those controls. (An example is VistaDB, for example.)

Anyway, I'm anxious to see what will transpire. I do hope that this news doesn't turn out to be a dead end, like the promises of version 2.