Kindle Fire HD with the Think Outside Stowaway Bluetooth Keyboard

Just after Christmas I splashed out a few thousand miles from my United MileagePlus account on a new Kindle Fire HD 7, the 32GB edition. Unlike the older (well, a mere 12 months older, if that) Kindle Fire, the new Fire HD has more of the trappings that make a good tablet: lighter, thinner, better screen, more memory, camera, faster WiFi connectivity, Bluetooth, and so on. I’d bought one of the original Kindle Fires when it first came out, and it turned into my favorite entertainment tablet even though it was severely hobbled with regard to what you might term basic functionality.

The reason for me using the term “entertainment tablet” is because of how Amazon bundle free videos for Amazon Prime users. I’ve watched the entire Star Trek Enterprise series on the Kindle Fire and I’m now half way through Buffy, the Vampire Slayer. I ripped DVDs I’ve bought and loaded them on the Fire through the USB cable and everything just worked fine. During 2012, every flight I took had me watching some video on the device. In short, it excels as an entertainment device. But that was really all I used it for: I never downloaded any productivity software for it, nor games, etc. It never seemed quite there as a general purpose tablet for me.

The Fire HD though is much better. Watching videos is just as good (I’ll have to re-rip my DVDs into HD format though), but now it’s usable as a productivity device too. And it is at this point I dug out my ThinkOutside Stowaway Bluetooth keyboard. 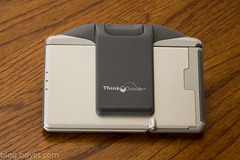 Back in the mists of time, I used to use a Sony Clié PDA. The NR70V to be precise. I loved that little device, used it all the time, and bought accessory after accessory for it. One of those was a small foldable keyboard made by a company called ThinkOutside and badged by Fellowes. This keyboard had a Clié connector and essentially you opened up the keyboard, plugged in your Clié, and off you went, writing documents, etc.

Although Sony didn’t include Bluetooth support in the PDA, they did sell a Bluetooth add-on shaped in the form of a Memory Stick that you could plug into the Clié’s slot. So I also bought a ThinkOutside Stowaway Bluetooth keyboard as well to try it out. It wasn’t that successful for me: I needed the Memory Stick slot for, well, a Memory Stick so I could store files. So the Bluetooth keyboard got put away. I did try it out with other devices over the years (including my full-sized iPad), but it never seemed that successful.

Until a few days ago. Since the Kindle Fire HD supports Bluetooth, I pulled out the Stowaway again, put in a couple of new AAAs, and paired the keyboard to the Fire. (Briefly: pull down the top bar by swiping from the top of the screen, select Wireless, select Bluetooth, make sure Bluetooth is enabled, and then touch Search for devices. On the Stowaway, press Ctrl+Fn+Fn to make it discoverable. Once the Fire finds the keyboard, touch it on the screen. It’ll give you a PIN to type in on the keyboard – remember to press the blue Fn key when typing the number. After that, the Kindle and the keyboard should be paired.) 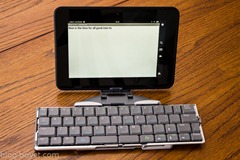 And it works extremely well. In fact, Android (the Fire HD uses an altered Android Ice Cream Sandwich OS) supports keyboard input well (unlike iOS I’ve found), and the Fire HD inherits that support. You can use the arrow keys in a list for example (including the main carousel). Tab does what you expect, Esc navigates backwards. And so on. The 7-inch Fire HD rests nicely in the PDA stand and it’s not so heavy that it becomes unbalanced. Typing on the keyboard is fine: the keys have a nice travel and click, and the whole keyboard is almost full size. The only real negative is that, due to the construction of the keyboard when it’s open, pressing too hard on either end can rock the keyboard a little, but it’s easy to counter. I’ve also purchased Documents To Go for the Kindle – this takes me back as well, I used DataViz’ Documents To Go extensively on my Clié – so that I can write Word docs, Excel spreadsheets, and the like.

Now the fly in the ointment: the keyboards are no longer made. ThinkOutside were acquired by iGo, but iGo no longer make the keyboards. All is not lost, since they do appear on eBay every now and then for about $50-$70 (search for “iGo Stowaway keyboard” or “XTBT01” which is its model number). It seems that Dell also rebadged the iGo keyboard for their Axim PDAs (and made the keyboard black instead of silver). Hence you can also search for “Dell Axim Bluetooth Keyboard” (be careful though: Dell also produced a non-Bluetooth foldable keyboard for the Axim range so don’t bid on the wrong thing). Also be careful: some keyboards are missing the folding PDA stand and others don’t come with the carrying case.

Hi Julian, I found this piece useful. I'm looking for a igo keyboard to go with my android device (Nexus 7) and am now confident that it will work okay, when I find one. As I live in New Zealand my search is a bit of a mission. Cheers, Ted

Ted: Good luck with your search!