Moneyspire, a month later: the UX

(This post follows on from a couple of earlier ones, one, two, as I seek to replace Microsoft Money for my personal financial accounts.)

In my main job, I work for DevExpress, a company that designs and writes user interface components for other programmers to use in creating the visual aspect to their applications. Controls like menus, ribbons, grids, charts, dashboards, reporting, what have you. We spend a lot of time in the design phase, working out how a particular control should work, not only from the programmer’s viewpoint, but also – and more importantly in my view – from the user’s. So, it should come as no surprise then that this post is all about Moneyspire’s user interface, its user experience if you like, and, in particular, its shortcomings.

I’ve been using it for a month now, so I’ve had plenty of time to make a list of issues with that user experience. I shall be using screenshots from the demo file that’s supplied with Moneyspire to illustrate them.

First up, the main window itself. This issue is particularly annoying and frankly bizarre (I know of no other app that I use regularly that does this): the app doesn’t consistently maintain the main window’s size. Say you’re using the app, and you resize the main window to a size you can work with. Close the app down (and you assume, since every other app does, that the app makes a note of the size of the main window). Start the app up again, and – boom – it’s shrunk.

Example: I set the main window to show the total with a bit of white space underneath on the Accounts page, and to be able to easily see the Cleared tick boxes on the right for a specific account.

When I start the app up again? The window has shrunk both vertically and horizontally.

Not acceptable. After a couple of uses of the app, I have to reset the main window size.

Next issue. When you look at the account transaction page, there’s a button at the top labeled “Add”. Any guesses what the keyboard shortcut for it is? There’s no clue (a letter underlined, for example). Can I tab to it? Nope. Tab only navigates between the transaction grid and the Search box in the top left corner. (Seriously?) Hover over it with the mouse cursor to show a text hint? Nope, nothing happens. Alt+A then? Nope. Ctrl+A? Nope, that selects all the transactions.

Here you go: it’s Ctrl+N. For “New transaction” of course. (That’s what it’s named in the menu.) So why is it not “New” instead of “Add”? Why are there no hints, like I explained/expected? (There are no mouse hover text hints anywhere that I could find.) Why does the tab key not work as you’d expect from other apps?

Let’s create a new transaction. As a dialog layout, it works well enough for me although I’ll admit I kind of miss Money’s separate dialogs for withdrawals, deposits, and transfers. (I’ll also note the title is “Add transaction” which belies the menu option name.) In particular the tabbing works as you’d expect, and the buttons have titles with underlined letters (“Save” is the default button so just works with the Enter key).

There are a couple of things that jar here though. The date input field works well enough: each day/month/year component of the date is a separate input field, and you can use up/down, home/end on each to get the result you’d expect (although the home key on the year part gives you 1601, and the end key, 9999 – LOL). I just wish Alt+down dropped the calendar part down, like it drops down the list in the combo boxes.

Talking of the combo boxes, FFS guys, it’s now 2018. It is not sufficient to start typing some word in the edit box, and all that’s shown in the resulting list are the entries that start with those letters. That’s so 20th century. Far, far better would be to show all the entries that have that sequence of letters within them. For example, the other day I wanted to enter a category for a mortgage payment. I start typing M-O-R-T and nothing comes up. I know I’ve paid my mortgage before, it’s a bill every month after all, but what I’ve forgotten is that the Category for it is … “Bills:Mortgage”. If I started typing B-I-L then boom easy-peasy there is the correct category in the displayed list. But if I’ve forgotten that, tough. Oh, and that’s how Microsoft Money does it; you remember, the app that hasn’t been updated in 8 years. 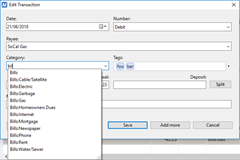 (Another quick peeve: press Esc to dismiss that dialog, and if you’ve altered anything, you get a small dialog asking whether you really wanted to cancel, with Yes and No buttons. Fine by me, except that pressing Escape on that dialog to mean “No” doesn’t work.)

And now for some real issues for me, ones that might not affect others. Issues so large that my previous boast of “I’ll only use Moneyspire for a month and just leave Money well alone” never happened. I’ve been religiously updating the transactions in both apps because these issues are deal-breakers.

You can display a list of Categories and Payees in both apps. In Moneyspire, that’s all you get, a list. In Money, not only do you get the list, but you can select one of the items and display a page that shows all the transactions for that Category/Payee. Believe you me, this is invaluable. Example: 8 years ago when I bought my Volvo 1800S,  I had it transported from California to Colorado. How much was it? With Money, I looked up Automobile as a Category, then oooh, there’s Automobile:Transportation, double-click, and one transaction was displayed for $1,173.00, so that’s the answer. The payee was “United Road” which I would never have remembered in a million years. With Moneyspire, I would have had to go back through each account I had open at around that time, one at a time, and use the Search box to try and spot the transaction. (And it was with a credit card account that’s now been closed down, making it even more difficult to find.)

Even worse: I download OFX/QFX files from my financial institutions to help me reconcile my accounts (usually called “Download transactions”). Sometimes the text for the payee the banks use is ... bizarre. (Examples, just for Amazon.com in my last credit card statement: “AMAZON.COM AMZN.COM/BI”, “AMAZON MKTPLACE PMTS W”, “AMAZON MKTPLACE PMTS”.) The nice thing about Money is that it tried to work out what I’d called the payee before. Not 100% accurate, sure, but good enough most of the time. Moneyspire doesn’t bother, and just adds the wacky name to its list of payees. Even worse, even when I correct the transaction, the wacky name stays in the payee list. As for Money? It would recognize that the payee no longer has any transactions, and just delete it.

I could go on (I’d love to drop/hide some columns in that grid of transactions because I’d never use them, and oh, why does the Tags combo box have a separate dropdown button to show the list, but when I try and select something from that list, the fields from the dialog underneath show through and ARRRRGH), but at this point I shall just stop.

I’d have to say after a month of using Moneyspire, my first conclusion is to just fuhgeddaboutit. Let them fix some of these irritating user gotchas and change them into better user experiences, and then maybe I’ll try again in the future with a later version. My second thought is, bugger it, let me write the damn app I want (I designed the database schema a year ago after trying this lot out the first time) and just use the DevExpress controls I know so well to render a proper user experience.

Thank you for the review Julian. Your feedback is much appreciated, and it will definitely help us improve our software. Please stay in touch, we have great enhancements coming in the next few months.