POPA and Glif: photography accessories for the iPhone 4/4S

I’ve been playing around a bit with Kickstarter recently. One of the projects I offered to fund was originally called Red Pop, a gizmo that attached to your iPhone to (a) give it a better grip like a normal camera, and (b) have a nice physical button on top to take photos. They reached their funding, got asked by Red to rename it to avoid any confusion (which they did, to POPA), and then eventually released it. (The following photo is courtesy Beep Industries.) 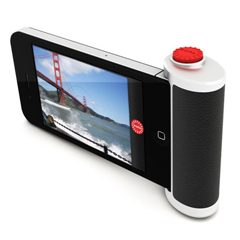 I finally got mine a couple of weeks ago. There’s also an app you download to provide the software support for the button grip. You essentially push the grip onto the phone (there’s a standard iPhone connector in the grip). It’s a nice tight fit so it doesn’t fall off. Pushing the grip onto the phone starts the app. After that, you’ve got yourself a phone that looks a bit like like a retro camera. The app takes photos, has its own camera roll, and you can share photos in the usual social networking manner from within the app.

So what do I think? First of all, I find it really easy to take photos with the phone now. Before POPA, I would find it hard to keep the device steady and also touch the shutter release button on the screen. For some reason, the act of pressing the button jogged the phone, which meant I was prone to taking blurry pictures. The app itself works well, although it’s a little annoying to have two camera rolls. You can however save individual photos to the standard roll, which makes it easier to use another photo app to process them in various ways, say with CameraBag.

The grip also has a standard tripod mount of the bottom, so you can use your iPhone on a monopod or tripod if you want.

The main downside is that you have to remember to carry the grip with you at all times. It does come in a little bag so you can stuff it in a pocket. You can’t keep the grip mounted all the time since it blocks off the mic, so you can’t take phone calls without having to whip it off. The other thing is that the grip is very tight. Putting it on for the first few times made me afraid I was going to scratch or damage the phone.

Apart from that the real problem is the price. It’s £50. Yep, fifty quid, not bucks. Which translates to around $85 once you factor in the shipping from England. (I got mine through my Kickstarter funding of $75.) Belkin have their LiveAction Camera Grip which, although not perhaps as good looking, has the same functionality. It’s $50 but can be found cheaper if you look (at the time of writing Best Buy have it for $10 off and free shipping).

I’ll also note that, with iOS 5 you can take pictures using the volume up button on the side of the phone. I’d have to say the “pushing down” rather than the “pushing away” action is the main factor in stabilizing the phone for me to take sharper pictures. So. maybe I just don’t need this external grip any more, although it does feel comfortable to hold. Let’s say 7/10 stars.

As regards my Kickstarter experience, not bad. Beep Industries kept us well informed about the progress (the grip went through a couple of changes as they geared up for manufacture) and there were a couple of videos to keep us wanting more. The only issue I have at the moment (which I’ll admit that I haven’t complained about) is that at the level I and 429 others funded, we were promised “You will also get your name 'in lights' and an image of your choice added to the ‘Thank You -You Rock! gallery’ on our Red Pop website.” Nope. Hasn’t happened. Oh well.

The other iPhone photo accessory I recently purchased was the Glif. (The following photos are courtesy Studio Neat.) 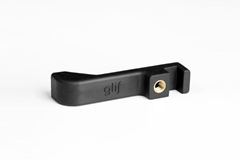 This is a pretty simple, yet nicely designed, accessory. You can either use it as a tripod mount like this (the iPhone just slides in, both portrait or landscape): 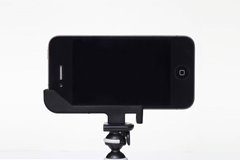 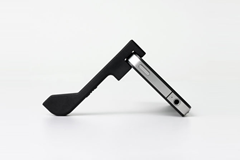 As I said, pretty simple and very nifty. Easy to carry around (you just keep it on the phone itself; it doesn’t get in the way). And a mere $20. There’s also the Glif+ which provides an extra perpendicular clip in case you’re worried the phone will fall out of the Glif and a screw-in eye for the tripod mount so you can attach it to a keyring or something. This one is a 9/10 for me.

thanks for the review of POPA.

On the names in lights comment - that's still going to happen but as we're only TWO people, we've concentrating on getting the product out, the app, emails, support, website etc etc.

We'll get it up eventually.

Brendan: Thanks for popping in and commenting. Regarding the "names in lights" thing: actually I haven't taken that good a photo with POPA yet to put it forward anyway :).

Good luck with everything!