Another entry in my series of “fragrant dried leaves in a pot” (English version), or “rotten stuff in a pot” (French literal translation): in other words, stuff I found interesting in the past month and tweeted or Facebooked.

In essence they took those luggage tags that airlines wrap around the handles of your checked-in bags – the ones with the three-letter airport codes writ large – and combine them into pithy phrases. Here’s an example: 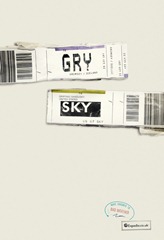 The little stamps in the lower corner underline the tags’ message.

A quick read on maybe why you don’t need to hook the DOM Ready event when programming a web page. I’m not 100% sure I agree with the thesis, but then again I haven’t yet tried taking one of my blogs, modifying it, and seeing what happens.

Recently Penguin reprinted five of George Orwell’s books: Nineteen Eighty Four, Animal Farm, Down and Out in Paris and London, Politics and the English Language, and Homage to Catalonia. For the reprint, they commissioned David Pearson to design all five covers and they are all unfailingly brilliant. I’d have to say that the cover to Nineteen Eighty Four is possibly the best, in a very tricky way: 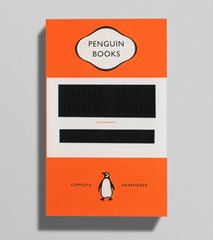 Yes, both the title and the author’s name have been concealed by black foil (however, you can still read the words because they’re embossed into the card) to simulate censorship. Outstanding idea. I shall be picking up all five from Amazon.co.uk.

Informative article on which methods have been removed from jQuery 1.9, on the premise that they’ve been deprecated for a while. By using the migration plug-in mentioned in the article, you can easily identify if and where you are using them. By the way, jQuery 2.0 (which is in production) removes support for IE8 or below, so that’s going to be an even bigger change…

404 pages are what you get if the web site can’t find the link you wanted. Generally they just say that and let you try something else (boring! Just like mine here on the blog), but, occasionally, people put up some great ones. Here’s a complete and utter time-waster yet brilliant 404 page from Romain Brasier. Save the lemmings!

John Cook introduces an awesome card trick that relies only on logic and the English language. Simple enough that kids can learn it and use it effectively. (The third comment on the site explains how it works, but do try to work it out for yourself first.)

Ned Batchelder has a good post on why it’s a bit silly and counter-productive to lambast the programming languages you don’t use (aka., language wars); after all, all programming languages were designed to help solve particular problems. As an example he poses an interesting WTF question:  why does this JavaScript code using the map() function produce the given answer?

Try and work it out before heading over to Ned’s post.

Great write-up about converting some simple code that uses jQuery into Backbone's models, views, and collections. I’m not a user of Backbone myself (we use Knockout as the MVVM in our DXTREME product), so I’ll try and make the time to convert this example to Knockout.

Interesting article on JavaScript promises. These are abstractions that help you manage callbacks for simple tasks (for example, make a request for some asset through AJAX, providing a callback function to be called when the request succeeds or errors out). Implementations have simple ways to chain promises together.

You’ve seen all those posters that say, in very simple elegant typography, “Keep Calm and Carry On”? Well K-Type has recreated the font (the original World War II poster was hand-lettered) and have made the basic roman form free to download. You can now recreate the standard poster (or any jokey derivative): 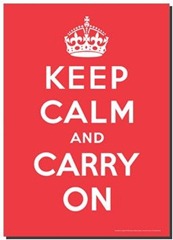 (Image from Barter Books, from whom I ordered a couple of copies a while back.) K-Type have even included the George VI crown in the font: it’s the caret “^” character.