Ronald Searle was a brilliant cartoonist, as any fule kno

I learned today that Ronald Searle died at his home in France on 30 December, at the end of last year. He was 91. He was, without a doubt, one of the best cartoonists of the last sixty to seventy years, with a certain inimitable scruffy style. Certainly one of my favorites. 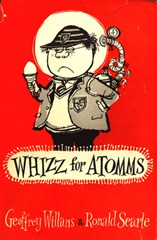 Back in the early 50s, Geoffrey Willans, a journalist with the BBC European Service, approached Ronald Searle to help publish a humorous book about schoolboys in a preparatory school. Searle was not keen: he’d just finished the latest St Trinians book and had foresworn drawing any more “school” cartoons, yet reading Willans’ manuscript changed his mind. The two collaborated and produced the first Nigel Molesworth tome Down With Skool!.

The book was a huge success and was followed by three more, How To Be Topp, Whizz For Atomms, and Back in the Jug Agane, the latter published posthumously since Willans died of a heart attack in 1958.

The stories were all about and narrated by an anti-hero schoolboy called Nigel Molesworth who went to a prep school called St Custard’s. The tales were based on Willans’ time as a schoolmaster. Molesworth (or, as he writes it, molesworth – capitalization, grammar, spelling, punctuation are not his strongest suits) is not there to learn, he hates learning. Schools are “wet and weedy [. . .] they are nothing but kanes, lat. french, geog. hist. algy, geom, headmasters, skool dogs, skool sossages. my bro molesworth 2 and MASTERS everywhere.”

During the early to mid 1900s, earnest books about pupils at boarding schools were a successful children’s fiction genre (think the Billy Bunter stories by Frank Richards, the Chalet School series by Elinor Brent-Dyer, the Jennings books by Anthony Buckeridge, and the Malory Towers series by the unequalled Enid Blyton, as well as books by umpteen long-forgotten jump-on-the-bandwagon authors – and then note that Hogwarts is such a school) and Willans and Searle lambasted them unreservedly and without mercy. Molesworth, despite his name, was not a worthy schoolboy; he was not heroic, but lazy, a serial daydreamer, with scathing commentary on his schoolmates and schoolmasters. Searle’s brilliant drawings captured this awful run-down St Custard’s and supplemented and augmented Willans’ prose beautifully.

My Dad read them all before I was born (I have downstairs in the basement his copy of Whizz For Atomms with the cover as shown, given to him by my Mum in the mid 50s just after they were married), and so naturally I read them too, although my schools and schooldays were certainly not the same. Nevertheless I loved the Molesworthian sayings (“as any fule kno”, “ect ect chiz moan drone”, “coo ur gosh”, “hem hem”, and so on) and his adventures and daydreams, and it took me a huge effort in my teens to remember to spell the abbreviated etcetera properly.