Takuzu, or the Binary Puzzle

When we were in Paris in April (yes, April in Paris!), I read Le Figaro every day to catch up on the election news (Sarkozy vs. Hollande vs. Le Pen) and to help try improve my French comprehension. While the latter was fairly successful, I was diverted by the puzzles page. Not only was there a Sudoku puzzle, but there was another puzzle I hadn’t seen before called Takuzu.

It’s a fill-in-the-grid logic puzzle, but unlike Sudoku you can only use 0s and 1s. Here’s an example from binarypuzzle.com, tagged as “easy”: 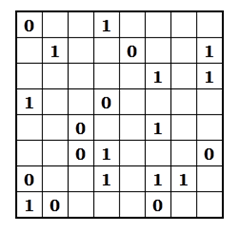 It’s quite fun to do. Let’s take a look at solving this one. I generally start off by blocking off the runs of two 0s or 1s (applying rule 2). 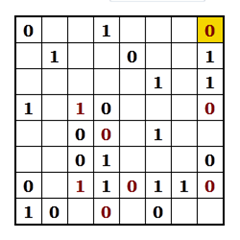 As you can see, this oftentimes produces more runs of two, so you can apply rule 2 recursively. 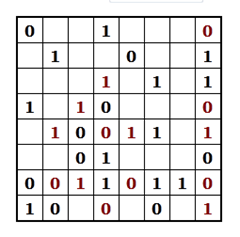 Take a look at row 5 now. Notice that it already has four 1s. By an application of rule 1 you can fill in the remaining two cells with 0s. Column 4 is even simpler to complete using the same rule. However take a look at row 3 for an example of applying some lateral thinking. In that row, there are two copies of the following pattern: 1 . Consider putting a 1 in the empty cell: you’d end up with three 1s in a row, a violation of rule 2. So, that empty cell can only be a 0. In this example there are several examples of this pattern (don’t forget the columns as well). 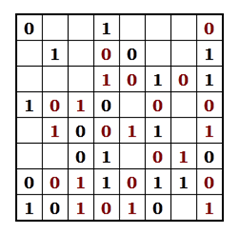 And this, of course, gives more opportunities to apply the first couple of rules. And, in this case, we can finish the puzzle quite quickly. 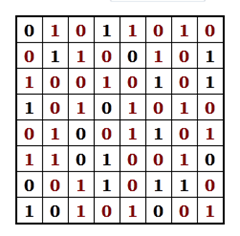 As this is an easy puzzle, we didn’t have to use rule 3. Generally, it’s only the more difficult puzzles that rely on this particular rule.

If you want to practice, I’d pop on over to binarypuzzle.com and try a few out. The hard ones require a bit more lateral thinking than I’ve shown here.

If you have an iPhone, there are also several apps available in the AppStore that implement the game. Unfortunately the name Takuzu is not widely known (it seems to be limited to France and Le Figaro especially, and sounds like a Japanese weed to me) so you have to search for “binary puzzle” or even “binary Sudoku puzzle”. Here are a few:

Now playing:
Armstrong, Craig - Childhood
(from The Space Between Us)

I've built a mobile game of the same concept but using colors instead of 0s and 1s and name it Notrio, my game has puzzles of size 6x6 to 12x12, 4 grades including Easy, Medium, Hard and Evil. If you're interested in trying it out, you can download the (free) iOS version from https://itunes.apple.com/us/app/id1007923505 Best, Son Pham

Did you tried also this: https://play.google.com/store/apps/details?id=com.mjk.rigy.binary

Let me know your opinion. 1001 puzzles are now available and many more will come.

And, try as I might, I find I have no possible answer to @RaFi.

This is by far the most fun puzzle to solve for me. I downloaded a game called ”0h h1” about four years ago and only recently started to get really interested in it. I was wondering how one would go about making a program that generates these kind of puzzles. Do you have any tips, or other sources of information that I could learn from? PS, I’m the current legit record holder on 6x6, 7seconds, on 0h h1 :D!

Thankful for any response!