Tintin: the British cars in The Black Island

I am slowly making my way through the Tintin comic books in the original French, just so I can keep my hand in. I’ve now got to number 7, L’île Noire, or as they say in English, The Black Island.

(Note: all images are copyright Hergé/Moulinsart.) 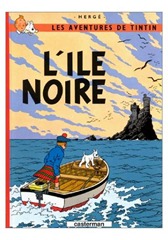 Like all of the early books, this was originally drawn by Hergé in black and white. It wasn’t until L’étoile mystérieuse (number 10) that he started publishing them in color, at which point, since they were proving so popular, he went back and redrew and colored the previous 8 (Tintin au pays des Soviets was never drawn in color, probably because it was essentially crude anti-Communist propaganda rather than a cohesive adventure per se) over the next few years. L’île Noire was first redrawn and colored in 1943, but when the British publisher Methuen was ready to print a translation in English in the mid-sixties, they decided that it desperately needed updating. The main reason why was the adventure was set in England and Scotland, and Methuen thought that it didn’t properly depict modern Great Britain at all.

Hergé sent one of his illustrators to England to take some photographs and gather information about places, planes, trains, and automobiles, and on his return they redrew L’île Noire completely and reset the plot to 1966. As a kid, when I first read it, L’île Noire therefore really resonated. We’d just moved to Le Havre (which is why I was reading it in French in the first place) and the look of the whole book was quintessentially English to me. Especially the cars that Hergé and his studio drew. Imagine you are 7 or 8 again: you like cars, you can spot them and name them, you pay attention to such things. So I thought it would be fun to identify here all the British cars that appear in L’île Noire.

The adventure starts off in Belgium, but pretty soon the plot moves to Sussex. The first car we see is the blue taxi that Tintin takes from the station to Eastdown, where a suspicious plane had crashed: 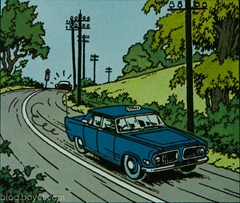 It’s a blue Ford Zephyr (to be precise, a Ford Zephyr 6 Mark III, characterized by the split grille at the front and the rear lights sloping outwards at the top).

Unfortunately Tintin is being pursued and is captured by the baddies in a red Jaguar Mark X: 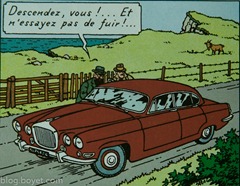 This one is not I fear one of Jaguar’s prettiest cars, with its forward sloping front grille.

Some adventures later, the baddies escape in the Jag, and Tintin has to flag down a couple in their car – it’s pulling a caravan: 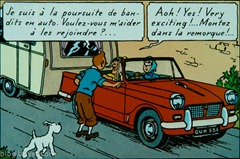 It’s a Triumph Herald. A convertible to boot. It’s hard to tell from the drawing, but if it is an original one then it only has a 948cc engine. No wonder it was having problems pulling the caravan. In fact the caravan, in which Tintin was travelling, broke loose and crashed. Tintin was forced to flag down another car  to continue his pursuit: 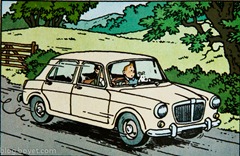 This one is perhaps a little harder to identify, since the basic shape was used by British Leyland throughout their marques (Morris, Austin, Riley, Vanden Plas, MG, Wolseley), but it’s an MG 1100. Not my favorite cars from the 60s at all, with Hydrolastic suspension copied from the Citroën 2CV, and built at Cowley when the unions were at the height of their power (so the quality was pretty crap).

But what’s this? The baddies have crashed into a tree and escaped on foot to the nearest station! And so we get a glimpse of our last car (the other half of the book just involves trains, planes, and boats):

Although we only see the rear third of that blue car, it’s obvious what it is: a Rover 2000TC (aka the Rover P6), the preferred police car in the late 60s, early 70s. It was also the car that Princess Grace of Monaco was driving when she crashed and died from her injuries in 1982.

And there we have it, a nice little quintet of mid-60s British cars from the only Tintin book set in Great Britain.

Thanks for that - I enjoyed it, and shared it on FaceBook with contemporary Brit-chums. Dad had a Ford Zephyr too. It was the only new car he ever owned, and he claimed it was the worst: its clutch pedal dramatically fell off on the M1, as we drove up to see Grandma.

I look forward to a similar cultural analysis of Asterix in Britain in due course.

Will: we used to have a Ford Zephyr too, an earlier model than the one depicted here. Dad exchanged it for his first new car: a Ford Corsair. We didn't keep it long because we moved to France and Dad had a (French) company car (and hence avoided all those problems about left vs right-hand drive, those yellow headlights, etc).