A bit late in announcing this, but it all took rather longer than I thought. Not the creation of the MOBI file, but the publishing of the Kindle Edition of The Tomes of Delphi: Algorithms and Data Structures (hereby abbreviated to ToDADS). Let me count the ways. 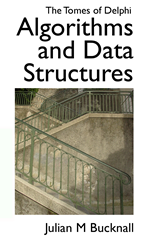 First thing that happened is I uploaded my MOBI file as a new project on the Kindle Direct Publishing site. That was on Sunday, 26 February. I quickly wrote a blog post about my travails in producing the ebook.

On Tuesday, I got an email from KDP (actually it was labelled “Alert”, chilling the heart). In essence, I’d triggered an exception: the original edition of ToDADS is still on sale at Amazon, albeit as second-hand copies only, but still listed. The email asked me to prove I owned the copyright. Yikes!

As it happened, I remembered getting an email from my editor at Wordware saying that the copyright had reverted to me. But where was this email? Let’s explain. In the “old days” at TurboPower (aside: this book doesn’t half talk about TurboPower, here and there) I used to use a program called Forté Agent for all my emails and newsgroup work. I knew I still had the data files somewhere… In fact they were on my desktop machine (that I no longer use on a daily basis). I fired it up and scanned the files: lots of emails between Wordware and me about the writing and the publishing of the original book, but nothing past early 2002. That was when I joined Aristocrat Technologies (TurboPower’s owning company) and I switched to Outlook, making extensive use of PST files. I still have a whole folder full of them: I’d archive them off once a month. But those PST files seemed to be encrypted: no recognizable text. So I’d have to load them one by one into Outlook. But when did all this happen? 2003? 2004? I had a vague feeling it was in 2005, since in 2006 I’d re-typeset the book and published it on Lulu.

I decided to use Google: maybe I’d talked about getting the copyright back on my blog. Turns out I did. After that it was relatively easy to find the email thread between Wordware and me (couldn’t use search because the PST wasn’t indexed; Outlook really sucks about that). It happened in October 2004.

After that, my reply with proof was plain sailing: I attached the thread and, for good measure, showed them that the reply they were getting was from the same email address as listed in the original book, which, due to the Look Inside feature, was visible on the Amazon website. (I’m so glad I’ve kept the boyet.com domain. I’ve now had the same personal email address for 13 years.)

KDP promised to reply within 48 hours. After 48 hours had gone by with no reply, I was starting to get worried. Later that day (Thursday) I was writing to a friend about it all when I decided to check my KDP dashboard. It was live! I didn’t get the confirmation email from KDP until Friday.

So, to cut a long story short: you can now purchase ToDADS from Amazon for the Kindle (and it should be available in the UK, Germany, France, and Italy from the respective Amazon sites); from B&N for the Nook; from iTunes for your iPad or other iOS device; or from Lulu either as an ebook or as a physical book. Apart from Amazon, all the other ebooks are done with Lulu as “publisher”.

I shall be promoting the Kindle Edition most of all. Several reasons I suppose. First of all, I get more royalties from Amazon (70%) than from Lulu (with Lulu, the e-bookstore takes a 30% cut and then Lulu takes its bit). Amazon is the ebook elephant: people are far more likely to have Kindles than any other book reader. Also Amazon make it really easy for experimenting with promotions such as making the book free for a week: getting on the top 100 list is important (using “Bucknall” as a search term has ToDADS at number 2; using “Delphi” it’s nowhere). I’ll report back on what I’ve done to promote it: I’m of the firm belief that ebooks are the way to go for self-publishing, so any help or tips I can give others will only be of benefit.

Just to confirm, since the non-Amazon versions are the Lulu published versions, they all have the poor typesetting you mentioned in your previous posts?

Craig: it's not the content that's the problem, it's the app/device that's displaying it. In particular, the Nook needs you to set the switch that enables the "Publisher Defaults" mode.

If you have a device that displays the content badly formatted, I'd love to know about it.

Craig: forgot to mention that the Nook for PC app works just fine "out of the box". It's just the Nook device itself that's peculiar in that aspect.