No, this blog post is not about that. This blog post is about the removal of frustrations, of deep embedded wrongs, and about aiming for something better and further out than the middle of next week. It’s also about this happening in 2012. 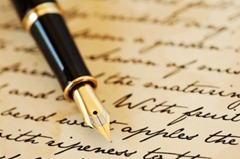 29 years ago, when my Dad was 50 and my Mum 55, they sunk their money in a dilapidated Vicarage in a tiny village in the middle of nowhere, North Yorkshire. Their aim was to convert it into a guest house, serving bed, breakfast, and evening meals to a legion of walkers and holiday guests. It took them just a bit less than a year to get it into shape and then they opened in April 1984. Four en-suite bedrooms to begin with (although after a year they added their own en-suite bedroom) and a menu fixe dinner. They stayed open for 7 months of every year (April-October) for 10 years. They closed in September 1993, funnily enough the same year I moved to the States.

Dad applied everything he’d learned running factories for Courtaulds and believe you me it ran as a well-oiled machine. At the drop of a hat, Dad could quote how much each stay cost them, how much they charged, and how much they made. He could quote room-nights and occupancy percentages. Their objective was to make enough money to be able to retire and stay in the same house during their retirement. Not to be rich, you understand, just comfortable and happy. And they did. Dad died December 2009 and Mum 3-and-a-bit months later in April 2010, still in the same house.

This year, in April, I will be 55. In 10 years’ time then – theoretically – I retire. What do I want at that point? What should I be setting into motion right now, so that, come 2022 (not a prime number, base 3) I have enough in retirement that I can continue to support my wife in her own career in the legal profession?

What are my talents? What can I do that I can tap into to build something over the next ten years to supplement that most meager of retirement pots? Simple: I can write. I can write code (mostly C# and JavaScript at the moment, with some Delphi thrown in for good measure, although who knows what’ll be popular in 5 years, let alone 10) and I can write words: narrative, technical text, fiction, fact. I have a published book under my belt and have written parts of others. I have a regular monthly writing gig with PC Plus (which is what I should be doing right now). I have this blog.

Coupled with this is what’s happening in the world outside: e-readers. I’m not going to argue about the pros and cons of a physical book, whose pages you can riffle through to get the sensory experience of words on paper – sight, sound, smell, touch – versus the plastic e-reader, whose memory can contain every single physical book behind me on my shelves and more. No, this is about the fact that e-readers are breaking into the mainstream. They’re cheap. It’s a damn sight easier to get a book onto them immediately you want it. You can annotate and search books with them (extremely powerful concepts for technical books). You can read your books on multiple devices, whatever you have close by. Using services such as those provided by Amazon and Barnes & Noble to their customers, e-books are easy to find and buy for them.

So my plan for 2012 is to write one, probably two, maybe three books and self-publish them as e-books. Not just technical books either: I have some ideas for fiction as well. The tools for doing this are not great at the moment, witness publishers like The Pragmatic Bookshelf writing their own e-book conversion software. Only through doing this myself can I see where the problems lie and implement whatever software solutions I can devise. Those solutions could then be sold as is or as a service to other authors.

Of course, I shall continue to write and publish posts here. The blog is a remarkable and cheap invention for writing and publishing. It helps to practice and evolve and hone style. Only through writing will I get better at writing. In fact, you may have noticed that in the past couple of weeks I’ve published five posts a week, even over the Christmas period. Expect the same in 2012. Not all will be technical posts, but nevertheless I’m aiming for some long form ones each week. The idea though is variety, some tech, some reviews, some plundering of previously written articles, some descriptions of “fun things from Julian’s collection”.

My other talent, minuscule though it may be, is acting. To be frank, over the past four years I’ve done bugger all. The last thing I was in was Crazy for You in May/June 2010 and the part was so small (it was essentially a British accent in a costume) I got away with a mere two weeks of rehearsal. Prior to that was a couple of appearances as the Ghost of Christmas Present (on stilts!) at the end of 2007 and 2008. I haven’t done anything meaty since Polonius in Hamlet in July/August 2007. The main reason for my dearth is that acting in a play requires a sequential continuous stretch of about two months: 4 weeks of rehearsals and 3 or 4 weeks of performances. Quite simply, I travel too much for my job to do this. (Agreed I did direct An Ideal Husband in September/October 2010, but the director’s job is over on opening night so it was only a 4-week commitment.)

I can’t begin to describe how disheartening this is. It is so frustrating that I can’t even go watch my friends in productions, I get jealous and infuriated. I can’t bear the “what will you be in next?” or the “why aren’t you in anything?” questions. I am the Grinch of actors. Better to be invisible than to be seen and to be seen grumpy.

So I’d really like to do something on stage this year and get out of this ridiculous funk. Maybe the Shakespeare in the summer; we’ll see. I can’t live just for work; I have to work to be able to live.

Which leads on to the next thing. I am so tired of being generally unhappy and frustrated. I snap at people. I’m overly sarcastic. I’m overweight. Stupid things and people anger me more than they should. This is not a happy place to be in. 2011 didn’t help one bit.

So, it’s time to get rid of all of those things that frustrate and anger me (yep: time to prune Google Reader and cull Facebook ‘friends’, etc) and time to concentrate on those things and actions that will help me get to where I want to be.

(Aside: it has now taken me 15+ minutes to get this published. There is a serious bug somewhere, either at GoDaddy or in the GraffitiCMS code. In essence, the thing I had to change was “menu fixe”, emphasized, followed by a period. Don’t ask. If you saw a couple of preliminary posts as I investigated, apologies.)

Good luck to you Julian. Yours was always the first article I turned to each month in the Delphi Magazine, and your data structures book is well thumbed on my shelf. You have a genuine talent for making challenging technical content approachable and entertaining, so I look forward to whatever you write this year.

Thanks Malcolm. I appreciate the vote of confidence.

To ensure I do this right and do this well, I just purchased Scrivener for Windows (and there I was thinking it was for the Mac only). It's well recommended for long form writing work by people I trust and, to be honest, writing my last book with MS Word sucked.