A couple of months ago I purchased The Body Farm on DVD from Amazon.co.uk. In theory it sounded promising enough: a series spinoff of Waking the Dead, with one of the characters from that series moving on from the break-up of Boyd’s cold case crime unit. It stars Tara Fitzgerald as Dr Eve Lockhart. 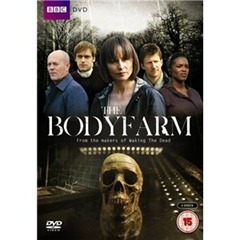 The setup: Lockhart is in charge of a body farm, a forensic laboratory where they research how bodies decay in various situations. So over the course of the series, we see bodies in a dry habitat (a kind of greenhouse), a body in a stream, a body on the ground leaning on a tree, and so on. There’s a group of four doctors there doing the research, of which Mike (Mark Baezely) – number 2 in the pecking order – seems to have had an affair with Lockhart. Then we have Oggy (Finlay Robertson) as a painfully socially inept geek – he never leaves the farm – and Rosa (Wunmi Mosaku) a naïve junior. None of these characters or their relationships are really explored, because, unlike Waking the Dead, each episode is only one hour long. There’s just enough time to get the forensics in, if that, let alone any exploration about who the heck these people are, what they want out of life and each other, and where they’ve been. There is no reference, for example, to Eve’s previous life under Boyd.

And then, into this happy milieu comes DI Craig Hale, who seems to be a complete police department in one person. He doesn’t seem to have a superior, he doesn’t seem to need police backup (except in the last episode perhaps), doesn’t seem to have to follow any kind of police policy or procedure. He’s like a fantasy DI. He convinces our intrepid band of necro-researchers that they can be police forensic scientists and which point they pull out all of their digital gizmos and plastic ziplock baggies out of the cupboard and solve the murders and have breakfast in the farmhouse kitchen to celebrate.

It’s been probably a month since I finished watching the six-part series and all I can really remember is the location of the third episode: Staithes in North Yorkshire. It’s a very pretty seaside village indeed. Oh and Tim McInnerny did a bang up acting job in episode 5.

The rest of it? Meh. Tedious.