Last September, we stayed in Richmond, North Yorkshire, for a few days in order to go visit the graves of my parents – it had been the first opportunity for us to see the gravestones and to pay our respects. As is normal the day we arrive in England, Donna was really tired (it’s an effect of the travel medication she takes), and so I left her napping and went on a little walk around Richmond, a town that, although I knew superficially around the market place and the Castle, was not one I’d explored in any great depth.

We were staying at the Frenchgate Restaurant & Hotel which is, appropriately enough, on Frenchgate, a cobbled cul-de-sac that was once an important thoroughfare, but which was now sidetracked by the main road through Richmond. I can well recommend this hotel-restaurant, we enjoyed every moment and every meal we were there. The room we had was great (I love heated floors in bathrooms) and very cosy and quiet. The staff were extremely welcoming. Quite a find, and we will certainly be staying there this September again. Anyway… 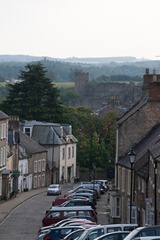 This is the view down Frenchgate (behind me is the stairs up to the A6108, aka Pottergate). The sign you can see on the right is the hotel and, of course, in the middle distance is Richmond Castle. 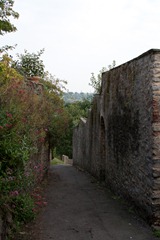 Right at the top is a side path going down the hill, known as Lombard’s Wynd (pronounced wind as in a winding path, not wind as in a breeze). It broadens out in a little while to a narrow street. 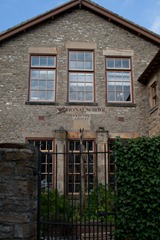 An old schoolhouse on Lombard’s Wynd. It’s now a private house but as far as I can gather it was an old primary school. Not sure when it was closed down. 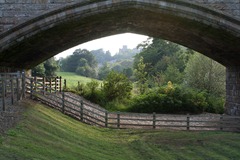 After crossing the old Railway bridge (as in, the bridge that led to Richmond Railway Station – now no longer a station), I dropped down to the River Swale and took this picture of the Castle… 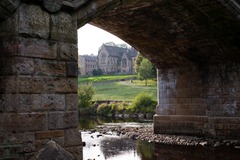 …and this picture of Richmond Lower School through the arches of the bridge. 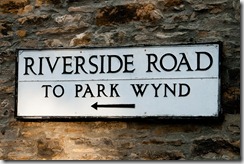 I then crossed back over the bridge, and walked through the park along the river bank. This was on the side of a house at the end of Park Wynd – I just love the typography. 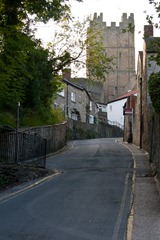 Then it was time to walk up Millgate towards the Castle. 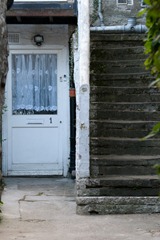 Unfortunately Castle Wynd was blocked by construction (a house was being renovated), but I snapped number 1. I can’t remember exactly, but I think number 2 was up those stone stairs to the side. 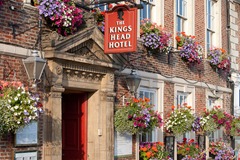 After that I walked into the Market Place, past Mum & Dad’s solicitors at the end of Millgate, and up past the King’s Head, which, I must admit, had a remarkable show of flowers. 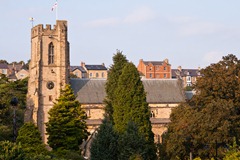 It was getting a bit late at that point, the sun was going down, so I walked down Ryders Wynd to Frenchgate and took this picture of St Mary’s Parish Church in the evening light before returning to the hotel.

Reminds me of staying in Harrogate and touring the surrounding area. Can even remember parts of the obligatory pub-crawl in York!

Julian, I loved this little piece on one of my favourite places in the UK. I spent some of my childhood there and attended the school in Lombards Wynd from the age of 7 to 9 years. I have just turned 50. I was last in Richmond when I was 21 and was devastated to discover that my old primary school was now a private home.

What was more disappointing was finding that the beautiful old cobblestones of Lombards Wynd had recently been covered in tarmac! Oh how I used to love trying to get to school down that cobbled backstreet on a winters day with the snow & ice thick on the ground without ending up on my behind! Many a time the class was filled with steaming children drying off from their tumbles on their way to school. And I simply must mention the iceslides we used to make in the darkest part of the playground- such a thing would just not be permitted in these safety conscious days. Quick, throw some sand on it before a child has some fun (I mean hurts themself!)

I was also rather terrified of having to pass the cemetery opposite when it was dark-probably because nasty boys used to jump out from behind the gravestones!

But I did enjoy the wonderful firework displays put on at Barnard Castle.

Thank you for the lovely reminders :-)

Sheena: Fantastic recollections, thank you. And thank you for the information about the National School -- so it was closed down at least 30 years ago. The ice slides must have been awesome: that's quite a hill...

With regard to the Wynd, all I can say is that there's no sign of cobblestones there now. Sigh.

Hi Julian......I used to live in Richmond Yorkshire in 1964 to 1969... I now live in Australia.....I have read your interesting blog and wondered where I could contact Sheena Newman if possible?? I am coming back to UK in June 2016... I am going to visit Richmond and show my husband where I lived etc......any info would be appreciated.... I'm sure it will be an emotional visit. Hoping for a response Thanks regards Ange Hyland

Ange: Unfortunately I cannot get in touch with Sheena. I do wish you a great trip to England in June though. Richmond is one of my favorite towns to visit: we've been there every year since I wrote this post, and I dare say we'll be there again. Enjoy your memories and I hope it hasn't changed too much since you lived there.