After the longest time dithering around, finally someone at the Beeb got round to publishing the complete set of this remarkable TV series from the mid-80s onto DVD. I bought it pretty much as soon as it appeared on amazon.co.uk. 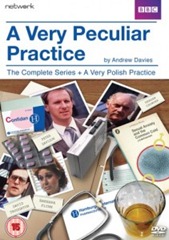 I’ll admit that it was one of those shows that I remember with fondness, all the way from the Elkie Brooks theme song to the awesome character-driven comedy, via the two nuns. I can’t remember when the last time I would have seen it; I dare say it was repeated since its first transmission in 1986, but I have no recollection of watching it a second or third time. The DVD set comes with the second series, as well as a one-off play based on the main character (A Very Polish Practice). So how does it fare watching it at some 25 years’ remove?

First let’s describe the setup: our protagonist (hero is too strong a word) is timid Dr Stephen Daker (Peter Davison). He’s fleeing his disintegrating marriage and lands up as second choice as GP in the medical practice for Lowlands University, a dismal 60s-built concrete set of buildings separated by an infinitude of roads and grassy greens and litter. It’s supposed to be situated somewhere in East Anglia and is a nod to Malcolm Bradbury, who wrote about such a university in The History Man. The rest of the practice are a wild bunch indeed: Dr Jock McCannon (Graham Crowden), head of the practice, a one-time academic with a brilliant book to his name, Sexual Anxiety and the Common Cold, and now coasting, narrating his autobiography in between knocking back the Glenfiddich; Dr Rose Marie (Barbara Flynn), an uber-feminist and an excellent doctor -- provided that you were female, that is -- it was her thesis that the main reasons for illnesses in women were due exclusively to men; and Dr Bob (“please try and call me Robert”) Buzzard (David Troughton), the yuppie Thatcherite doctor whose only goal in life was to be rid of his patients as quickly as possible and to propose and drive changes to increase the practice’s revenues. The practice tends to the students, lecturers, and professors alike.

The University, as with all government institutions at the time, is going through some trying times: the Government is instituting some swingeing cuts. Will the Vice-Chancellor, Ernest Hemmingway (John Bird) succeed in attracting outside Japanese funding for his proposed Science Park? Will the practice contain, and the University survive, a sudden outbreak of STD? Will Stephen find true romance with the police postgrad Lyn Turtle (Amanda Hillwood)? Will the two nuns find what they’re looking for in the University’s trash before the dustmen arrive?

It turns out that, on watching the first episode, I was strangely unmoved. I smiled at the titles and the song, I recognized the series’ themes, I welcomed the characters back, but it was as if I were indifferent. I started to worry: was this a series stuck in its Thatcher era and hadn’t aged well? Was my memory fonder than the reality? The first episode, I suppose, sets it all up: Daker arrives, he and we are introduced to the main characters of the series, and he not only saves a patient but also Jock’s reputation (Jock misdiagnosed appendicitis for a shy, nervous foreign student, assumed it was stress, advised a course of deep breathing and meditation).

It was with concern, then, that I watched the second episode. I reckon it was here, after I’d settled in as it were, that the surreal nature of the plot started to manifest itself. It is a black comedy after all. I started to enjoy the different kinds of manipulation experienced by Stephen from his colleagues as he’s pushed to addressing the Freshers about the practice, his first bumbling steps to a romance with Lyn, and, I’ll admit, Hugh Grant as a evangelical preacher. The characters’ quirks started to come out, the comedic aspects started to settle down. It wasn’t until episode three though that Stephen’s character came together for me: prior to that he was way too timid, way too deferential, way too spineless.

After that it was plain sailing for me: the third episode with the psychotic professor played by Timothy West who is certain his wife is having an affair (she was, but the prof wouldn’t have recognized it); the fourth where one of Bob’s old friends from his student days proposes the practice runs a trial for a new drug that is supposed to pretty much cure anything, but neglects to mention the side effects (burning red ears and vertigo); the fifth where the practice has to track down the carrier (and spreader) of an STD and the highest at the University are implicated; the sixth where Jock and Stephen thwart Hemmingway’s plan to convert a women’s dorm house to the lecturer’s hall for the new Science Park; and the final episode where the government inspectors arrive to cut 25% from the University’s budget and everybody starts fighting for their jobs by buttering up said inspectors in their own way. Throughout, the entire cast were brilliant. Graham Crowden as Jock is fabulous, Barbara Flynn as Rose Marie is gorgeous and devious, David Troughton as Bob is as earnest as a panting labrador. The scene where Bob bursts in on Jock’s failed attempt at suicide (Jock had just finished his autobiography so it was a fitting coda), doesn’t recognize what’s going on, and then leaves, is brilliant. Ditto the scene where Stephen comes out of his office having spent a long shift with innumerable patients with a possible STD only to see Jock accompanying the two nuns down the hallway is divine.

The story goes that Andrew Davies wrote this show because he suddenly discovered that he owed the BBC £17,000 for an advance for a TV project that fell through. He decided that the only way he could pay the advance back was to write another TV series. For extra comedy (and to introduce a meta-plotline, or Inception as we’d say now), he added the character of an external lecturer in Creative Writing who suddenly finds he owes the BBC £17,000 and is scrabbling hard to write a black comedy for television about a University to pay it off. Every time he dreams up something totally bizarre and off the charts for his plot, something happens at Lowlands University to top it.

Funny, surreal, fantastic, satirical, charming, captivating. A great series even at this remove.

(I’ll note in passing that the British Film Institute placed this at #89 in their BFI TV 100 in 2000. Andrew Davies won a BAFTA for the script.)