The iPhone 5 comes with a new connector: out with the decade-old 30-pin dock connector and in with the Lightning connector. The new connector is way smaller (meaning that iOS devices can be even thinner than before), doesn’t depend on being inserted the ”right side up”, and of course just doesn’t work with all those devices you may have had with the old connector. At the time Apple promised an adapter to convert from old to new and also provided new USB cables.

In our house we have a couple of iHome clock/alarms that have the old connector style (they’re great for dropping the phone in to recharge it) and in my Volvo I installed an Alpine iDA-X305S head unit (the chief benefit of which for me is the ability to play music via the Pandora app on the iPhone). The latter case was especially disheartening: the device would not recognize the iPhone 5 at all, even via USB. Equally disheartening was the fact that the adapters were not available immediately. Nevertheless I pre-ordered a couple, hoping that they would solve the problems.

They arrived today, encased in the usual Apple style box: 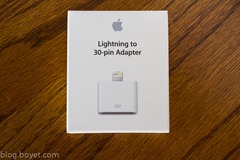 First up was trying one out in the car. I’m am happy and relieved to say that it worked perfectly: the Alpine started playing one of my stations on Pandora immediately. A huge sense of relief that: I have missed Pandora while I’m driving, coupled with the ability to recharge the phone.

Next up was how it worked in one of the iHome units. 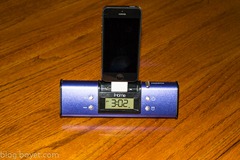 Yep, looks ridiculous. But… it does work. I can easily dock the iPhone 5 onto it. Undocking will remove the adapter along with the phone since the Lightning connector is a snap fit whereas the 30-pin connector is a slide fit. Slightly more efficient than using the USB cable, all told. It even plays music through the dock just fine.

Finally, I have a POPA camera accessory (previously known as Red Pop) for the iPhone. On the iPhone 4 it just slides on the end of the phone (stays there via friction, essentially) and gives you a big red button to press to take photos like a real camera. Yeah well it’s going in the trash. No way does this work with the adapter: the whole Heath Robinson affair falls apart as you bring it up to take a photo. (I was surprised to find out while I was collecting links for this article that Beep Industries, the makers of POPA, have since closed down.)

So, all in all, even at $30 a pop, the adapters are worthwhile for me.

Excuse me, I’ve got to go. I feel like driving through the autumn afternoon in 64SAINT listening to my Thievery Corporation Pandora station.

Now playing:
Thievery Corporation - Shadows of Ourselves
(from The Mirror Conspiracy)