For our wedding anniversary this year we went to the Peak District and stayed at a hotel in Baslow, just north of Chatsworth Park. Of course, since we were so close, we had to go visit the House and grounds.

Bizarrely, despite the fact my family used to live near Matlock when I was a late teen, I’d never visited either. I’d driven though the Park at the time in my parents’ borrowed Capri, but never stopped. Maybe at 18 I was too cool for art.

With our visit, we were fortunate in some ways, but most unfortunate in a couple of others. The South Front, the part of the house that looks down that impossibly beautiful lake with its Emperor Fountain, was being renovated and was covered with scaffolding and white tarps. Also, due to a drier spring than is usual in Derbyshire, the water level of the lake that feeds both the Cascade and the Emperor Fountain was too low, so both attractions were only being turned on to a strict schedule. The fortunate part: Sotheby’s had an exhibition of monumental sculpture in the park, with some quite wonderful pieces.

First, though, the house. The Dukes of Devonshire, over the centuries, had amassed quite an impressive art collection; with some striking modern art collected by the current Duke.

The first piece that really grabbed me was this Damien Hirst sculpture of St Bartholomew in the Chapel (the full title is Saint Bartholomew, Exquisite Pain). The light was atrocious and I didn’t want to use flash, so it’s taken at ISO 1600 with as steady a hand as I could manage. 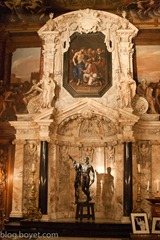 (I’d click through to see the full sized image.) It depicts a man with scalpel in one hand, outstretched, and a pair of wicked scissors in the other. Over his right arm there’s something draped, a coat? Then you see that it’s his skin and you see his muscles and tendons, and realize that he’s meant to have flayed himself. (St Bartholomew was one of the twelve apostles and was supposed to have been skinned alive in Armenia.) A disturbing image, especially in a chapel, but strikingly executed.

For the next one, I didn’t make any notes about its provenance but it’s a fun modern metal sculpture of a man in a hat: 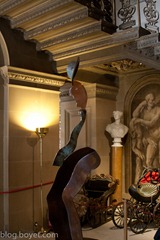 As I mentioned before, the light inside was bad and I didn’t want to use flash. Here’s a great picture of one of the ceilings along the tour: 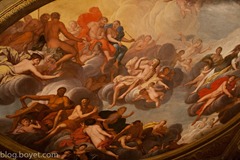 Another just about acceptable photo (1/2 second exposure, wide open, at ISO 1600 – I must have been leaning on something) of the famous violin on the door: it’s a trompe l’oeil painting, not a real violin: 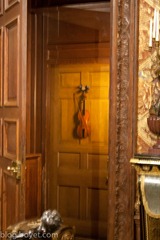 A little easier to take was this portrait of Georgiana, Duchess of Devonshire, as Cynthia from Spenser's Faerie Queene. (If you saw The Duchess with Kiera Knightley, the film was about this rather flamboyant 18th century socialite.) Unfortunately although the light was better, taking the photo full on would have resulted in too much glare. I tell you, it just wasn’t my day for indoor photos. 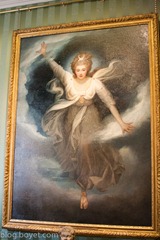 The sculpture gallery was magnificent. The story here is that prior to filming Price and Prejudice at Chatsworth, the sculpture gallery had tapestries and wall-hangings adorning the walls, and had chairs and couches dotted around. They were removed temporarily for the scene where Elizabeth Bennet changes her mind about Mr Darcy, and the resulting light in the space was so spectacular that after filming the tapestries were not replaced and the gallery was again filled with the neo-classical sculptures that it used to contain. The effect now is breathtaking: the light from the domed skylights illuminating the gritstone walls whose soft color reflects the light evenly over the white marble sculptures. Here’s a couple of pictures of the lions at the far end: 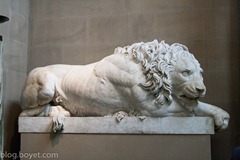 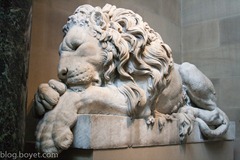 And this is Ganymede: 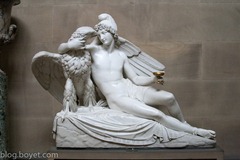 See what I mean about the light? After all my difficulties trying to (unobtrusively) take good photos elsewhere on the tour, suddenly it was easy.

Outside, it was trying to rain (and succeeded, off and on). As I mentioned above, there was a display of modern sculpture in the park, so we dodged the raindrops and took some photos. Of particular interest were Legend and Myth by Damien Hirst (again) at the end of the lake. Here’s Myth, the unicorn: 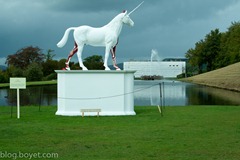 (You can see the Emperor Fountain running at half-height in the middle distance, and the tarp-covered South Front at the end.)

And here’s Legend, the winged horse: 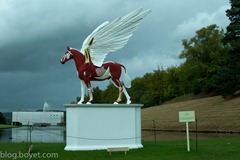 I suppose Hirst is exploring here the differences between legend and reality by showing these mythical creatures as having ordinary muscle, sinews, and bone. Or maybe he’s wacky. The sculptures are weirdly beautiful, if austere and a bit cold.

The final piece I’d like to show you is really quite extraordinary. A sculpture of a roaring lion made from steel and used tyres by Ji Yong-Ho. It’s just called Lion: 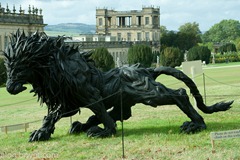 It’s raw and menacing with a wonderful sense of frozen movement, and incredibly beautifully done: 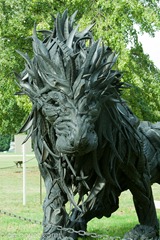 All in all, I think we spent all day there: we arrived before the grounds and house opened, and we left when they were shutting. Quite a wonderful day.

Now playing:
Fine Young Cannibals - Tired of Getting Pushed Around [The Mayhem Rhythm Remix]
(from The Raw & the Remix)