OK, time for another quick delve into my calculator collection: it’s the Casio fx-98. This particular one is interesting for a few reasons: first is it’s a scientific calculator, albeit not RPN; second, it’s the size of a credit card, even though it’s thicker; third, it’s solar powered – no batteries to worry about; and finally, Casio licensed it out to Radio Shack who produced the equivalent under their own name. 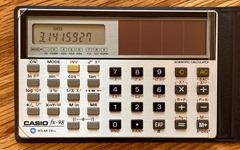 I must admit that it’s a fascinating one, mainly because of its size and its use of solar power. I’ve never used it in earnest – it’s one of those “I must have this in my collection” calculators – mainly because when it was made (1984 – 1988) I was using my HP 27S and so wouldn’t have bought it. It’s now pretty rare as well: this one I bought on eBay nearly 7 years ago for $250, “as new”, and it came with the case and manual and box. It also came with a book called Strategies for Scientific Calculating by Morton Rosenstein, published in January 1982. I’ll have to have a read of that one to see how things have changed on that subject in the past 40 years…

Basically it has 8-digit precision with a 2-digit exponent if you’re using scientific number representation. 43 functions, several modes (for example, degrees, radians, or even gradians). I also love the way that they’ve expressed inverses for sin, cos, and tan: with the –1 in a different color that matches the INV key. And then … there’s a random number generator key! I wonder how random it is, I’ll have to generate a bunch and try to analyze the built-in algorithm. 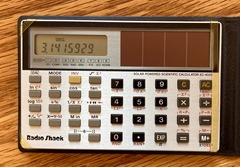 And as I said, it’s fascinating that they licensed it to Radio Shack, who produced exactly the same thing and called it the EC-4009. When I say exactly, I mean it, all the way down to the colors, the keys, the case, etc. (By the way, my photo shows it displaying 335/113 rather than π exactly.)

It used to be that you could more easily find the Radio Shack one – I bought mine a year earlier for half the price – but nowadays it seems they are both getting really scarce.