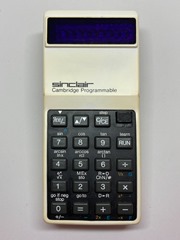 I bought it some ten years ago now, for the princely sum of $80. However, apart from the initial “does it work?” test I did at the time (as you can see, it's a little "worn" and faded, shall we say), I never really got into playing around with it. A couple of reasons I suppose: yes, it’s got an LED display, so there’s the whole battery thing to consider; and even better, because of the power requirements a programmable calculator would need, it doesn’t use AAA batteries, but instead a chunky 9V battery. Which, in turn meant that Sinclair had to fudge a different battery cover that bulged out. Not a very lovable profile at all. 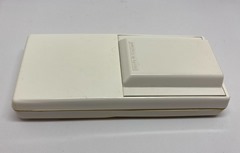 The back view: BULGE!

Of course, you could always use the extra cost Sinclair Mains Adapter as well so you didn't have to worry about battery life. (Aside: I wonder if I can find one...)

So, the usual 8 digit display (plus there’s a scientific/exponential display mode as well), a weird layout of 19 keys to be sure (it took me a while to work out where the decimal point key was), and – because it’s programmable – there’s a grand total of 36 program steps in a loop. Once you reach step 35, it’ll go back to step 00. Woot! Of course, since there’s no storage, you can only have one program at a time.

And writing those programs? Well, have a look: 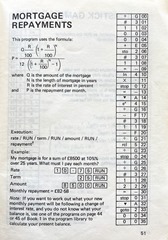 Each of the 36 steps can have (essentially) a single keystroke. Even better, there’s just one storage cell for a saved variable (sto stores the current value, rcl gets it back). Programming this to calculate anything remotely complicated would be … time consuming.

Luckily there’s a Program Library book with some 400 programs ready for you to type in. The calculator I bought on eBay didn’t have the official Sinclair version of this book, but instead had the Radio Shack version. (Aside: I just found the official version on eBay and bought it.)

And, no, although I enjoy programming, using this would have driven me up the wall. Back it goes on my calculator shelf.