OK, I’ll admit, this is a wacky one. Way back in 1988 I lived in a one-bedroom flat in Hammersmith, one that was inside a converted Victorian church. I’d bought it in October 1986, and in fact I was living there a year later when that big storm hit southern England: I remember walking to Stamford Brook tube station the next morning trying to avoid all the broken branches, etc, that were strewn around.

Anyway, one evening in January 1988 I was returning home from work, and I saw that my front door was a little ajar. Yep, I’d been burgled, the burglars having essentially forced/kicked the door in. They’d taken the usual kinds of stuff, my hi-fi and so on, and also my fun little Casio ML-81 calculator that I used as an alarm clock. Even wackier: I had to immediately dash to a theatre since it was opening night for a play I was in.

So, I needed a new alarm clock. The calculator was no longer being sold so I couldn’t just replace it, hence I just went and bought a digital clock, a Casio PQ-100 as it happened. That clock lasted years and years. I even brought it with me to the States, and it was our primary method of getting up in the mornings. But eventually it started to break down. That little arm that keeps it upright broke off. The back of the clock came off and wouldn’t go back on again and got lost. Eventually it just completely died and we replaced it with something else.

But, nevertheless, I missed my little PQ-100. It was small, simple, did the job perfectly, and had this idiosyncratic memory for me. Unfortunately, it seemed that my usual place for finding out-of-date electronics – eBay – just didn’t have any. I tried on and off over the years when I thought about it, but nothing. I was also suspicious that it had only been sold in Europe and never made it to the States, hence I might never find a replacement.

Until a week ago. Someone in Madrid put one up for sale on eBay – pretty much new in box – and boom I bought it. No hesitation. It arrived this morning, and now resides in pride of place on my desk. 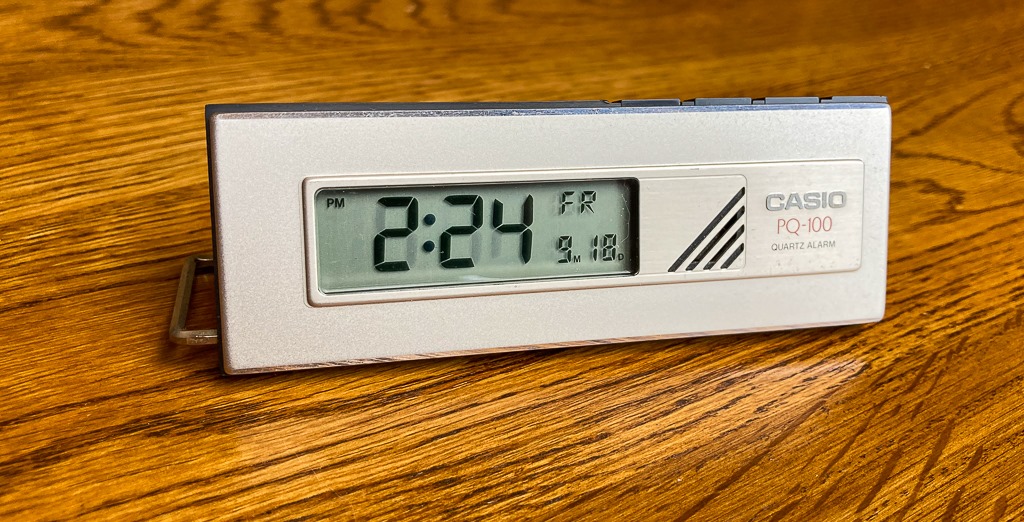