One of the pleasures I had from the late 80s and early 90s, before I moved to the States, was watching Inspector Morse on the telly. The episodes were longer than the average TV cop show and had a leisurely pace which perfectly suited the Oxford setting. It also helped that the title role was sympathetically played by John Thaw – leaving you with a slight disturbing thought that Morse was perhaps an older gentler Jack Regan – with his sidekick, Sergeant Lewis, by Kevin Whatley. Undoubtedly, one factor in the success of the series was due to the chemistry between these two characters and their evolving relationship as well and the interactions with the other permanent characters in the show (one of which was undeniably Morse’s red Mark 2 Jag). The end-titles music was incredibly memorable and poignant, being derived from the Morse code for ‘Morse’. 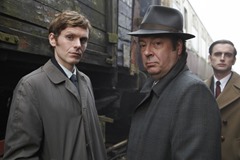 Colin Dexter, the author of the Morse books, killed off the main character in The Remorseful Day and this was subsequently filmed in 2000 (Thaw himself died in 2002). After that, us Morse fans had nothing to sate our police procedural appetites, until 2006 when a pilot show had Sergeant Whatley returning to Oxford as Detective Inspector from some posting abroad. This pilot was grown into a collection of episodes that just finished this year after the seventh series. Although some of the earlier episodes had some good explorations of the main characters and the relationship between Lewis and his Sergeant sidekick, Hathaway, as a whole this personal facet seemed to be dropped more often than it was used. To be honest, the final couple of series was disappointing in that aspect, making Lewis and Hathaway seem very impersonal and the episodes a bit tedious (ho hum, a crime happens and I bet they work out who did it).

Then, in 2012, ITV showed a pilot of a prequel to Morse, showing what Morse was like in the 60s, when he was just a Detective Constable at the start of his career. This was Endeavour, and the pilot was successful enough that a series of four episodes were commissioned, which have just completed their initial airings in England and that I’ve just finished watching on DVD.

And bloody hell, but they’re good.

They’re good for all the same reasons the original series was good. The episodes aren’t necessarily just about the plot du jour, but about the characters, who they are, what they do and why, and their relationships. Morse, ably played by Shaun Evans, is a quiet, thoughtful, prone to flights of brilliance, Detective Constable starting out on his career. He’s taken under the wing of Detective Inspector Fred Thursday, played by Roger Allam, a brilliant bit of casting. The chemistry between the older avuncular pipe-smoking seen-it-all Inspector, retired from London to Oxford, and the young melancholic constable making his mark and impressions among the top brass is top notch.

Of course, there are all the slight hints to the established Morse legend: the Mark 2 Jag is seen on a car dealer’s forecourt and Morse takes a good look at it; Jim Strange who would be Morse’s boss in the future is here a mere constable, but with the usual “matey” thrown into conversation every now and then; Max the pathologist appears at the start of his career; the final episode even gives a clue as to why Morse has a pronounced limp in the future (actually a real limp that Thaw suffered); and there are pointers to other characters that will appear later in Morse’s life. Nevertheless, the episodes can be viewed without knowing and understanding all these clues.

The scene setting in the 60s is perfect. The first 12 seconds of the first episode set the mood impeccably, showing a double-decker travelling down the Broad in Oxford with all 21st century traffic trimmings removed and just a collection of 50s and 60s cars parked or being driven. The producers must have trawled the whole of Oxfordshire and its environs for this flawless vehicular assortment (although the red-topped Morris Minor convertible was a bit too much). Just the thought of them having to close off Broad Street for this 12-second shot is mind-boggling. The 60s settings are prevalent throughout: everyone smokes (with Thursday being a pipe man), typewriters abound, phones are literally dialed, the police have Rovers, ruddy ten-bob notes are handed over for purchases, there’s casual paternalistic sexism, suits have thin lapels except for the wide-boys. I particularly liked the third episode, Rocket, set in this awful old-style union-ridden factory. My first job between school and university was in such a factory where management had their own dining room and the workers had their canteen; the impressions I gained from such a corrosive atmosphere meant I never worked in such a place again.

But the genius of the series is in the character development. The interactions between the stolid calm be-trilbyed Thursday and the impressionable insolent Morse are spot on. Throughout the series you can see the bond between them growing as Morse soaks up Thursday’s knowledge and experience and Thursday tries to guide him. Their relationship is very father-son, and especially so in the last episode when Morse’s own father lies on his death bed and we get to see some of the deep grief in Morse. The scripts are wonderfully written and superbly acted, especially by Evans and Allam. As I said before, the joy in watching is not necessarily about the crime and how Morse and Thursday unravel the plot to discover the perpetrator (there is a great moment in Rocket when they both work it out at the same time), but it’s about their beautifully understated interplay. Full marks to Russell Lewis’ scripts for taking the mythology of Morse and weaving a completely believable prequel.

All in all, I thoroughly enjoyed Endeavour. A second series has been commissioned (and I hope a third and fourth will). Providing the same people are producing and writing it, I can’t see it being anything else but an unmitigated triumph. Way, way better than Lewis ever was, even in the early episodes; maybe even better than Inspector Morse.