Three years ago today, we held the funeral for my Dad. He’d died of a second heart attack ten days earlier on the 21st December, the first one being a week earlier than that; I’d flown back on some last minute flight in between into the worst winter in the Dales for many a year. Mum asked me to write and deliver his eulogy in church. Here it is; it still fills me with an unending sadness.

Last Wednesday, for the first time ever, I went to the Register of Births, Marriages, and Deaths. I was going to register Dad’s death. Dealing with me was a very nice lady Registrar who asked me questions to elicit information and data about Dad. Since the dates she needed were about births, marriages, and death, I can start off here with those. 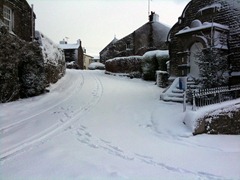 Dad was born Alan Thomas Bucknall, in Coventry, then part of Warwickshire, on Wednesday, 26 April 1933. He married Marjorie, my Mum, on Saturday, 5 November 1955. One might say it was the first celebratory event that particular Guy Fawkes Day. His and Mum’s first child, that would be me, was born on Saturday, 6 April 1957, which was, as Dad used to joke, the first day of the new tax year, meaning he couldn’t claim for a dependent the previous year. The second child, my sister Nicola, arrived nearly two years later, on Monday, 12 January 1959.

Whereas I, being the consummate gentleman, decided to be born in the comfort of a hospital, Nicola decided to arrive at home. The weather was terrible, much as it is now, and Dad had to jump on his bike and battle through the ice and snow to get the midwife – not having a phone or car back in those days.

The final date, then, was Monday, 21 December, 2009, when he died after suffering from a second cardiac arrest, the first being a week earlier.

In between all those dates, Dad led a full life and led his family on the same full life.

He graduated with an HNC in Chemistry and started work as a research chemist at Courtaulds in Little Heath, Coventry. In the same laboratory, there was a beautiful lab technician called Marjorie whom he dated and then married. 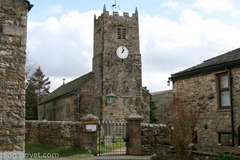 National Service then called and Dad joined up. He served for 2 years from January 1955 to January 1957, eventually ending up as sergeant. He was based in Basingstoke and Mum got a job as a lab tech at Aldermaston. On being discharged from National Service, Dad joined the Army Emergency Reserve for 3 years.

Somewhere around this point – I think I was 5 years old or so – Dad was involved in an industrial accident at work. Somehow he got his left hand caught in some machinery and it was partly crushed. The doctors had to cut his wedding ring off his finger because it had been flattened. From that point forward, Dad found it difficult to straighten his left hand, leaving him with a slightly claw-like cast to the fingers.

A couple of years later, we moved to the North Sea coast near Grimsby. We had a new house in a small village called North Thoresby, but, as it turned out, almost as soon as we moved in, Dad got promoted to oversee a Courtaulds paint factory called Celomer in Le Havre in France. They made marine paint. Dad travelled back and forth every month to see us in Lincolnshire, catching the ferry across to Southampton – a six hour trip – and then driving straight up – another good six hours.

I think this was the time that Dad first learned about food and cooking. He would eat out at restaurants with his friend and colleague Jimmy Ledwith, and try out local dishes like fruits de mer and eat huge bowls of mussels. Needles to say it wasn’t long before the whole family was shipped out to France to join him. We arrived in August 1965 and lived in a second floor apartment on the Avenue Foch in a block called the Porte Océane, the Gateway to the Sea.

A couple of years later Dad was on the move again, this time to Brussels, and to manage another Courtaulds paint factory called Solabel. Of course we followed along, in 1967. We lived in a fifth floor apartment this time, in a Flemish part of the city.

By 1968, Dad had been promoted yet again, this time to the head office in London. Dad, somehow, persuaded Mum that it would be a good idea to buy this rather dilapidated Tudor farmhouse in a little village called Newdigate in Surrey. It was dilapidated in the sense that the chimney on the oldest part of the house was leaning to such an extent that it was threatening to collapse into the house and bring down the roof, not that the roof had much structural integrity left anyway.

For me this was the first time I really became aware that Dad had a practical side. He could lay bricks. He could cut wood so that it joined up properly. He could repair car engines. Suddenly, instead of being just an office manager, he was a jack-of-all-trades handyman. I don’t know what happened to those genes, because I certainly do not have them, just ask my wife.

There was one incident early on in the repair and refurbishment of this house. The scaffolding was up around the house, the roof was off, and a blue tarp was draped over the joists to keep the rain out. And on this particular night the rain was certainly out; it was chucking it down in fact, wind, lightning, and thunder to complete the effect. Dad went out to make sure the tarp was tied down properly, and was up on the scaffolding, when the overhead electricity cable shorted out on the metalwork of the scaffolding. He was stuck on the planks, not daring to move in case he accidentally touched the metal poles. He was up there for a good hour or more, before the emergency electricity repairmen made it to the house and cut the power.

After four years there, we moved north to Derbyshire and another house to rescue. This time Dad built an extension between the old farmhouse and the barn.

Finally, in 1978, Dad resigned from corporate life in Courtaulds and became a postmaster and village shop owner in Bedfordshire. No real big house project this time: all my parents’ efforts were being expended in keeping the shop and Post Office open five and a half days a week. 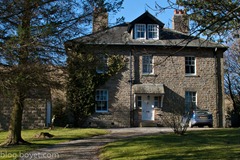 And then in 1983 Mum and Dad made their final move, to a house project bigger than anything Dad had ever done before. I’m talking of course about the Old Vicarage, converting it from a stately if down-at-heel house to a full five-bedroom guesthouse. It took a good 11 months of sheer hard work.

Once complete, Mum and Dad opened in April 1984 and ran the guesthouse for 9 years before retiring. Dad did all the cooking, breakfasts and evening meals, apart from the desserts, and would meticulously write out the menus every day.

During that time, in 1990 and 1992, Nicola and her husband Leslie had two daughters, Dad’s grand-daughters, Samantha and Laura. Dad was immensely proud of their achievements, both on and off the field.

I’d have to say that Dad loved this house, this village, its inhabitants, and this area. Although there was a time a few years back where they looked for somewhere smaller to live in, it never came to anything really. I think Dad didn’t really try: he’d decided to live here for the rest of his life.

He helped out with various small projects in the village and in the area. He repaired and rebuilt the side gate of the churchyard, the bench in the churchyard, the baptismal font at the rear of the church, the noticeboard at the gate, and probably myriad other small jobs now forgotten. He also did the accounts for organizations such as various Parish Councils up and down the Dale, the Muker Silver Band, and so on. Always by hand. I’d tried to get him interested in using a computer at one stage, but Dad preferred to write things down.

Despite what that may sound like, Dad was no Luddite. He always wanted to learn. I introduced him to Big Bang cosmology, quantum mechanics, string theory and we’d have long-distance phone discussions about the various theories. When we weren’t talking about them, we’d be talking about business: he was interested with the software business that I’m in, about the differences between how we rent out our ski condo and how they operated the guesthouse. He read most of the book I wrote about computer algorithms and was fascinated in particular by data compression techniques. He was possibly the most formidable cryptic crossword solver I’ve known: Mum would read out the clues and Dad would rattle off the answers for her to fill in. He had an encyclopedic knowledge of words and definitions, probably from that very same crossword solving.

In the end, Dad spent a good third of his life here in Muker and the Dales. I think that that time here was the happiest of his life and I’m happy that he’s to be buried in the churchyard to rest here forever.

(Notes: my parents lived in the Old Vicarage in the tiny village called Muker in the Yorkshire Dales. They are both buried in the graveyard at St Mary’s Church.)

I am sorry about your dad.

my dad was recently diagnosed with ALS and it has been hard for the whole family.

btw...thanks for the javascript for c# programmers bits.

I knew your dad well. Was at his 21st birthday in Bedworth. We holidayed together in Wales. Worked with him for years in Coventry. Also your mum Marjorie Maples. Lovely people. Would be great to hear from you. I live now in British Columbia, and my e-mail is [REDACTED by webmaster].