Over the past month or so, I’ve gathered a few links to interesting topics which I tweeted about at the time. Since Twitter is so evanescent, I thought I’d gather them in a post here on my blog, which is a little more long-lasting. That way, I can find them again when I need them. I’ll publish a similar list at the end of every month; indeed, because of this, I’ll probably tweet more of these interesting links.

I wondered though what to call these posts. I settled on potpourri, mainly because of the official definition – a mixture of dried naturally fragrant plant material – and also because of the literal translation from the French – a pot containing something rotten. Hence, you may find them fragrantly interesting or totally rotten.

You’ve all seen them: a photo on some weirdly named page suddenly appears on your Facebook timeline because a friend has been conned into doing something idiotic. Generally the post exhorts you to click on the photo, comment with something stupid like “Cute”, “1”, “Bear”, or whatever, and then exhorts you to watch and see what happens. Here’s the latest one that appeared in my timeline: 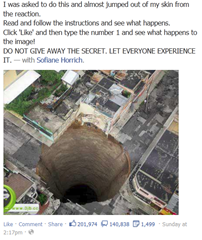 Guess what? Nothing happens. (Well, apart from Facebook adding in your useless comment.) But just look at the number of likes and comments. And that’s the purpose of, let’s call it what it is, this scam: this Facebook page holds a large “EdgeRank”. The greater this is, the more likely it will be exposed in people’s timelines. So the page gets sold – just Google “facebook fan pages for sale” to see – and the buyer alters it to hawk some old crap. But, hey, it’s got a big EdgeRank, so it’ll appear in a lot more timelines. (Daylan Pearce’s blog post about this scam.)

Over the past 12 to 18 months, the company I work for, DevExpress, has been changing to way we market our products. There’s been positive and there’s been, shall we say, slightly negative feedback on the changes. Here’s an interesting e-pamphlet – it’s a bit smaller than an ebook – on how to write this style of marketing copy and why it’s effective, despite what us geeks may think.

A fascinating interview with Christopher Nolan on the overarching themes in his Batman movies (he was the director of Batman Begins, The Dark Knight, and The Dark Knight Rises).

A real geek one this: the full definition of the markup that modern web sites use to capture and render content, like text, images, videos, etc, has been complete. This blog is HTML5 compatible, of course.

The 12 most incredible webcomics

Great list of some fascinating webcomics. I actually followed six of the twelve before this list came out (plus some others that didn’t make the list), which kind of makes me proud to be such a cutting-edge netizen. Or something. Anyway, there are no Garfields here, thank goodness.

Now playing:
Sade - When Am I Going to Make a Living
(from Diamond Life)