It’s well past time for a rave from the grave, methinks. About a year or so ago, we’d bought our new house and were starting to work out what we should keep when we moved. I had several boxes that I’d shipped from England after my parents had died, and It Was Time To Sort Their Contents Out. And in one of them I found this fun little gem: The IBM System/38 Keyboard Template.

Way back when, before I got my kick programming PCs, I used to write programs for an IBM System/34 and then its successor, the IBM System/38, the latter mostly for Manufacturers Hanover Ltd (which was merged into Chemical Bank, then Chase, then JP Morgan). I left Manny Hanny, as it was called unofficially, in July 1988, 30 years ago and haven’t touched one of these machines since. To be honest, my memories of this computer and programming it in RPG III are pretty much lost. I just can’t remember much about the System/38 in a technical sense after spending the next 30 years on PCs. 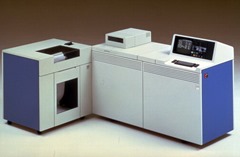 These were wonderful minicomputers for their time: the maximum RAM was about 1.5MB and the maximum amount of disk space about 1GB – so this Dell laptop I’m typing this on would easily do all they did, and faster. You used an IBM 5251 terminal to access and program them, and I think the maximum number of terminals you could hang off a System/38 was about 30. The cabling was certainly not Ethernet, but something called Twinax (the main thing about Twinax that I remember was that the terminals were connected to the main cable through a T-connector, and the cable had to be terminated at the end). The 5251 terminal was, of course, a green screen: two colors, green and, well, not-green. 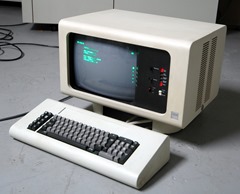 If you look carefully at the image of the 5251, you can see that the keyboard had a little recess above the top row of number keys, and that’s where this template fitted. The function keys were accessed by pressing the Cmd key (or Cmd+Shift) and then one of the number keys (with the – and = keys acting for function keys 11 and 12). The Cmd key was the top right one in the vertical bank of ten darker keys on the left.

Page 1 of the templates was all about accessing the CPF (Control Program Facility), the operating system for the System/38. As an example, if you couldn’t remember the parameters for a command when entering it, you could press CF4 (Command Prompt) to display a screen that showed them together with helpful hints and that allowed you to enter the values via input fields.

Page 2 was for Query Definition: accessing the records in the files stored on the System/38. I hesitate to call it a database language; SQL it was not. Page 3 was for executing the DFU (Data File Utility). In essence with the DFU, you could create simple programs for data entry, processing the data in records, and so on.

Page 4 was for defining a DFU program. Page 5 for SEU (Source Entry Utility). This last one was a text editor and was how we would write the source code for our RPG III programs (and the syntax for RPG III needs its own blog post).

Those 5 different templates were probably the only ones I really used, but then again, remembering this, even with Google, is a stretch. To be honest, for the last year or so at Manny Hanny, I used a PC with a special terminal emulator board inside: I could program away on the PC, and switch to a terminal to use the System/38. Those 5251 beasts were limited in scope and really heavy, to boot.

Next in this mini series: I shall scan my RPG III cheat sheet and talk about that.