Kickstarter, the Brydge, and the Surface RT

So, a while back, I backed a Kickstarter project called the Brydge. This is a keyboard for the iPad (2nd to 4th generation) that seems to magically attach and makes the iPad into a kind of Ultrabook. It even had speakers and its own power. I thought it sounded pretty nifty so I went for it at the $180 level.

Well, after a couple of design changes and delays (the usual kind of thing that happens to a Kickstarter project, I’ve found) my Brydge finally arrived today. And I’d have to say it’s pretty nifty. 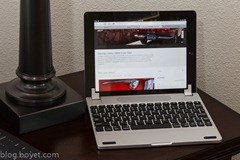 The Brydge grasps and holds the iPad tight through a couple of friction hinges that you can see in the picture. (It’s possible to pick the whole assembly up by either the iPad or the Brydge without it falling apart, although they don’t recommend you do.) The hinges travel from fully shut to fully open and they are stiff enough that you can place the screen – er, iPad – at any convenient angle. The Brydge is made of the same kind of aluminum as the iPad itself. It looks like it was made by Apple, it’s that good at mimicking their design ethos. When shut it looks a little like a weird-shaped MacBook Air.

The keyboard is great to use. The keys are nicely responsive and have a good bit of travel. It’s a standard looking Mac layout with command keys, alt/option keys, and the Fn key resolutely the wrong side of the control key (I keeeed!) I’ve tried it out with Pages and it’s very nice and fast to use. There’s a row of keys at the top that do iPad things, like a home key, brightness keys, a search key, a keyboard key (in case you really need to use the screen keyboard). There’s also a bunch of playback keys (next, previous, pause/play, volume) as well. All told the keyboard is well designed and just right for the tablet.

The speakers are a little weedy I’d have to say. They do work well – they “attach” through Bluetooth, as does the keyboard – but I just couldn’t get much volume in my tests. I would say that level-wise they are about equivalent to the iPad speaker. The one thing to note is that by using the Brydge speakers, you’re going to save a bit on the iPad battery, since the Brydge has its own. The battery is charged through a micro-USB slot and they reckon a full charge would last weeks.

If you look at the bottom left corner of the photo, you’ll see a TouchCover which is mated to a Surface RT. The obvious question now is: how does this new combination compare to the Surface? Weight is much more (the iPad + Brydge comes in at 2lbs 10oz, whereas the Surface + TouchCover is 1lb 15oz, 11oz lighter; I don’t have a TypeCover to check its weight). Now undoubtedly the extra weight is due to the aluminum casing and the lithium battery and the ‘real’ keys, so does this extra 3/4 lb add up to a real negative? I’d have to say just a little. Yes, the battery supplements the iPad battery so the combo won’t run out of juice any faster than with just the iPad (unless the Bluetooth connections make that much of a difference), but the iPad has better battery life than the Surface RT anyway. The keys are much better than the TouchCover – so much so, I’ll probably go buy a TypeCover just to have real keys again. There’s no mouse with the Brydge – it’s a bit weird having what looks to be a small laptop but with no trackpad – but it’s really not necessary that I’ve noticed. You do have a touch screen right in front of you, after all, and in my use I’ve noticed the TouchCover’s trackpad makes you lazy – you just tend not to touch the screen as much. The ability to set your screen at any angle is way better than Surface’s fixed angle (although the kickstand is a great idea on that platform). After that it’s down to the differences between the iPad and the Surface and that’s been done to death elsewhere.

Next week will be a real test: I’ll be taking both to Vegas for DevExpress’ annual Summit and taking notes on both. Which one will win out in the trenches?

Have you tried connecting the brydge to the surface? probably a good combination