While I was away last week in Vegas for the DevExpress Summit, my newest calculator was delivered: the Sinclair Cambridge Scientific. It was with a little bit of apprehension that I opened up the padded envelope on Friday afternoon to see what it looked like and whether it worked properly (sometimes sellers on eBay are a little, er, shall we say, enthusiastic about how good the calculator they’re selling is and somehow neglect to mention various obvious problems). This one was doubly worrying: the seller admitted that he made it from the kit – yes, for some reason, you could buy it as a kit and assemble it yourself: it was slightly cheaper than buying it pre-assembled. 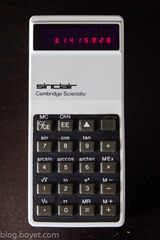 As it happened, the seller was on the mark. The calculator was pristine and, once I’d put in a couple of new AAAs, switched on immediately. The on/off switch, as with all calculators in the Cambridge range, is a bit flaky, but the red LEDs all lit up (type in 88888888, essentially) once I got the switch on correctly. There was no case (boo!) but the manual was included.

Unlike the earlier Sinclair Scientific (produced in 1974), which was housed in the Cambridge body without the Cambridge name and used RPN with a fixed 5-digit-with-2-digit-exponent scientific display, the Cambridge Scientific (from 1977) uses a “normal” 8-digit floating point display and  algebraic infix entry. In other words, in order to calculate, say, 2+3, you would enter 2, +, 3, =, to get 5. (Note though that the trigonometric and hyperbolic functions are entered in postfix, so sin 30 would be entered as 30, shift, sin.) There is also the capability to switch between the floating point and scientific displays.

The calculator sports a number memory, trigonometric functions (sin/cos/tan and their inverses – there’s a switch in the battery compartment that changes angles from degrees to radians and vice versa), natural logs and exponents, and a couple of arithmetic functions: square root and reciprocal. The chip (or the programming on it) is a little more accurate than its predecessor in the Sinclair Scientific, although it seems just as slow. For example, going through a set of calculations, say \( e^{2* \ln{(1/{\sqrt {sin (30)}})}} \), I get – with a couple of pauses for the sin and log/exponent bits – 1.9999 instead of 2, which isn’t too bad.

All in all, I’d have to say this calculator is much nicer to use than the Sinclair Scientific. It’s still slow, albeit faster than the earlier model, but it has more functions and is more accurate to boot. It does suffer from a lack of parentheses so your calculations can’t be too complex, but the addition of a memory does negate that problem to a certain extent. As with all Cambridges, it’s really light (73g or 2.6 oz with batteries) and small (2x5x11cm) and the keys are nicely clicky.

A very nice addition to my collection, I’d have to say.

Very nice! I always thought Sinclair had nice-looking industrial design in a pre-Apple sort of way.

I'm not really sure why, but I'm curious how you store all these calculators, Julian? Are they out on display or packed away in bubble wrap with those little moisture packs from tablet bottles? Ever get any out for a quick round of additions just to take them for a spin?

Malcolm: I store the calculators without batteries, mostly just in their cases or sleeves. We're in a dry climate anyway, so there's no need to keep them dry with silica gel. Mostly, I don't use the vast majority of them, I just have them to complete my collection.

For example, I have a complete set of the HP "Pioneer" calculators, and I only use the HP 27S on a fairly regular basis, even though, in HP calculator collector circles, the 42S is deemed the best ever made. With my set of Voyagers -- the landscape calculators of which the most famous is the HP 12C -- the only one that has batteries in it is the HP 16C, the programmer's calculator.

Actually, the calculator I use the most is the MathU RPN calculator for iPhone. An awesome calculator mainly because, of course, it's always with me.