“The Adjacent” by Christopher Priest

Imagine a prism. White light goes in on one side, and the different wavelengths comprising the light are split because they travel at slightly different speeds in the glass. Since the other side is at an angle to the first – the prism is a triangle – these different wavelengths come out as a rainbow. That’s what it is like reading a Priest novel: the true story, whatever it may be, goes into the triangular prism, and comes out as variations of the same tale. In The Adjacent, his latest novel, somehow Priest has discovered several new colors. 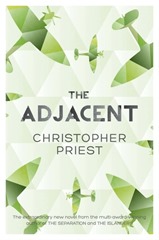 The novel has several distinct (or maybe not) strands. The main storyline is set some decades in the future with Tibor Tarent on his way back to England, having lost his wife Melanie in some sort of terrorist attack in Turkey. It is a familiar theme in Priest’s work: we get to share the unfamiliarity of a place through the narration of the lonely protagonist, with said protagonist being weirdly divorced from everything that’s happening around him. England is now IRGB, although we are never explicitly told what it stands for, it’s easy enough to deduce that it’s the Islamic Republic of Great Britain. The weather is appalling: due to climate change the country is buffeted by strong storms during the summer, and winter starts in September. Society seems to be in the process of collapsing: the only way to easily get around safely – albeit slowly – is in some kind of armored coach, the Mebsher. On his trip up to a Lincolnshire debriefing center – he’s a professional photographer with what might be some revealing photos of the incident in Turkey – from being let ashore in Southampton, Tarent catches a glimpse of an annihilated West London from a terrorist attack and strangely enough the annihilation has the same shape – an equilateral triangle – as was found at the place where Melanie died in Turkey.

But this is Priestly territory; it pays dividends to pay attention as the story unfolds. We are seeing things through Tarent’s eyes, he is our guide. And he is suffering remorse and guilt from his wife’s death and isn’t paying too much attention (or perhaps the wrong kind?) to his surroundings. His grief seems to be affecting his memory. There are other people on the Mebsher, including a woman whose name he can’t seem to discover properly: she just gives him what seems to be a made up name, Flo. She appears to think he knows a scientist called Professor Thijs Rietveld, the discoverer of a new theoretical quantum field, known as the Perturbative Adjacency Field. From this research, Reitveld (it’s actually Dutch for reedland, another Priestly clue for later) had also created a McGuffin device to take advantage of this phenomenon: it diverts physical objects into another dimension or adjacent reality. Tarent disavows any knowledge of the Professor.

In another part of the novel, Priest switches place and time: it is the Great War, and we are treated to a new character, Tommy Trent, and narration in the first person. Tommy is a magician whose act’s finale is a trick that makes his assistant disappear into thin air (we’re never explicitly told how it’s done, just some hints about light and a sheet of glass). It seems an Navy pilot on leave saw the act, pulled some strings in the Admiralty, and now Trent is on his way to the Western Front to see if he can do anything to help the British spotter planes appear invisible or just less visible to the Boche. I’s have to say this section of the book vividly brings to life what the Great War was like in northern France at the Front, the movement and deployment of troops, the noise and terror behind the lines. On his way there, Trent meets HG Wells, who is also on his way to the Front to help or cajole the troops there to try out an invention he’d devised. Trent ends up at an airfield called humorously by the airmen, La rue des bêtes, which is semi-translated as Animal Runway, but could equally be translated as The Street of Idiots. Again, Priest drops hints and descriptions that move the narrative forward, but that will return later in a different guise. One theme here is about magicians and illusions and misdirections: making people think one thing happened but revealing another. And, if you are not familiar with Priest’s other work, this applies to Tarent and Trent and the other characters. Are they misdirecting you? Can you tell?

Later on in the book, we are thrust into World War II, and an airfield in Lincolnshire that services Lancaster bombers, used for the nightly raids over Germany. We meet Mike Torrance, a technician who services the gauges and instruments on the planes. He meets a young female pilot who flies new aircraft from the factories to the military airfields as part of the ATA, the Air Transport Auxiliary. She’s Polish, engaged to an upper-class Polish officer called Tomasz who disappeared sometime in the German invasion of Poland. The first time she meets Torrance she sees a really strong resemblance to her fiancé. This section memorably illustrates life on a bomber airfield and the terror of the bombardment of cities in Poland and her escape from the war. I think the novel hinges on this particular episode: we see themes returning that we’ve visited before. Torrance spends a day with her and never sees her again, but in the last years of his life, he investigates her and her story only to find no mention anywhere of her fiancé. She’s tasked with flying a new Spitfire reconnaissance plane from the factory to an airfield in Sussex, and is never seen again – did she crash or did she just do what she fantasized to Torrance about and steal the plane? Why are all these names so similar: Tarent, Tommy Trent, Torrance, Tomasz? T for triangle?

In yet another part of the book (where I suppose you could say the fantasy theme pivots away from the earlier more reality-based narration) an American journalist interviews Professor Rietveld. For this interview, she uses a photographer to take photos of the great man for the subsequent article. The photographer is Tarent; it seems he lied when he said he didn’t know the Professor. Accidentally, he manages to photograph something unusual, something that defies common sense and explanation. Was it a magic trick? Was it the McGuffin?

Meanwhile Tarent sees the Mebsher he was travelling in annihilated in an attack just after it drops him off; an attack with the same signature triangular aftereffect. The people at the center don’t seem to be aware of his pending arrival, and his liaison officer, Bertrand Lepuits (yes, it’s (almost) a French translation of ‘Bert Wells’ who we’ve met in WWI) is nowhere to be found. Over the next few hours, Tarent succumbs to a fever – he does not know how much time passes or where he is or what he’s doing – and is looked after by another transient guest of the Center.

In the penultimate part of the book, we’re switched suddenly to a new place, an island called Prachous in the fantasy Dream Archipelago. We meet several people here, we see several events, all of which seem to replay, reflect, enhance, muddy the narrative so far. There’s a traveller in a bus, there’s an illusionist (who seems to die according to one person, but who lives according to another) with a disappearing-assistant trick, there’s a theatre (of war?) named after an aviator, there’s a mysterious plane and an even more mysterious shanty town called Adjacent on the island’s reedland.

Finally the book ends with a touching scene where all strands, real, fantasy, imagined, misremembered, illusory, misdirected, weave together.

From the viewpoint of a longtime reader of Priest, I’m guessing that all the delicate hinted repeats and replayed events are meant to distract you. I don’t think it’s supposed to be a “let’s see how many repeated intertextual references you can find” puzzle book. You’d be there all day, what with the external hints to The Prestige and to The Islanders, etc, as well as the internal hints to other parts of the narrative (Wells/Lepuits, for example, or the remarkably similar names people have in the various sections or the events they experience). No, it’s something deeper than that: I think it’s more about Tarent crumbling into madness until he finds his love again. Which makes it a love story, I suppose.

Despite that rather trite simplistic synopsis, I was spellbound. The book bears rereading; after all, I may have missed something…