I admit it, I am a helpless geek: I love collecting old calculators and computing devices. My wife thinks I'm bananas, and she may be right, but there's just something about holding something from the dawn of calculating electronics. 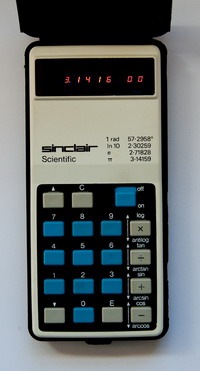 A couple of weeks ago, I snagged a very nice looking Sinclair Scientific, complete in its original box with the manual. This is a tiny (for the time anyway; this was 1974) calculator in the Cambridge series from Sinclair, and purports to be a scientific calculator. What does that mean, you may ask? Sinclair's understanding of the term in this calculator involves trigonometric operations (sin, cos, tan, and inverses), logarithmic operations (base 10, and inverse), numbers in scientific form, and RPN (Reverse Polish Notation). One of these Sinclairs was the first calculator I ever bought for myself. (It got lost way back when during one of the moves my parents made.)

It's about the size of a modern day candy bar phone (4.5 inches tall) though a bit thicker. The keys have a very positive click. It uses 4 AAA batteries for power. It lights up with tiny red LEDs and the numbers are very right-angled and square looking. It must be said that it is hopelessly slow and pretty inaccurate; I reckon a good 12-inch slide rule would do as well.

As you can see, the calculator display has 5 significant digits for the mantissa, and two for the exponent, yet the handy constants printed on the front are shown with 6 significant digits, indicating that the calculator is perhaps more precise than at first glance. As it happens, it is: it uses 6 digits internally for the mantissa, but can only display 5.

The printing of the number of degrees in a radian gives the hint that the calculator uses radians for its trigonometric calculations. It's slow though. For a laugh, here's the buttons you need to press to get cos 60°, with comments:

4 seconds later or so, the calculator displays 5.0008 E-1, or 0.50008. So, in reality, it's only really good for 3 significant places, 4 at a pinch, since the answer, as anyone who can remember from their schooldays knows, is 0.5. (The inverse functions take even longer: arccos 0.5 took a good 10 seconds just now and that was before I converted the answer back to degrees.)

The reason for the inaccuracy is that the calculator's chip was an ordinary 4-function calculator chip but reprogrammed. Since the programs for the trigonometric and logarithmic functions required more space for more significant digits, Sinclair reduced the number of digits from 8 in his normal calculators to 5 and then squeezed the implementations for the transcendental functions into the programmable part of the chip. The accuracy of the calculator for trig functions was noted in the manual as "a maximum error of 0.001"; that is, the value calculated would have a maximum error of 1 in the 4th significant digit. For the price though, it was remarkable.

The RPN implementation leaves a bit to be desired too, especially to those people familiar with HP RPN calculators. To start off a calculation, you had to press C and this would clear the stack to zeros. There was no Enter key: the first operand had to be added to the 0 from the cleared calculator. This means that a calculation like (1 + 2)/(3 + 4) would have to be done in two steps, with the result of the first step written down on a piece of paper. The stack is essentially two levels deep: the number form the calculation before (call it X), and the number being entered now (call it Y). There was no Swap key either to swap the X and Y operands around, and no Change Sign key; both keys are heavily used for performing calculations in RPN.

Nevertheless, it's dead cute and a great addition to my collection, alongside its Programmable cousin. I do note that there was a Sinclair Cambridge Scientific at one stage which had a more "standard" user experience: I'm on the lookout for one. (Update: Found one.)

My Dad had the programmable one. I remember it because it came with 4 volumes of programs for everything from calculating various electrical values through to a moon landing game.

If I remember correctly, they were also originally made in Elland, near my home town in Yorkshire. The company was originally called ESI, then became Sinclair then Sinclair Research.

Do you have the books with the example programs?

Geoff: Unfortunately I don't have the four-volume program pack :(. I'm on the lookout for one; it would be interesting to see how they can squeeze some apps in there. If I recall correctly, there's only 36 programming steps available... Makes programming this desktop with its 8GB of memory a piece of cake.

I too had a Sinclair Scientific when it first came out, and I think I paid around £60, a considerable amount at the time. It was, and I think still is, one of the cutest calculators of the time, although the operational design didn't match the physical design. Trig and log functions took a long time to evaluate, and were less accurate than looking up trig and log tables. Indeed, looking up tables was faster than waiting for the Sinclair Scientific to mull over the problem. Calling its operational logic RPN is, as has been observed, too generous. It used a postfix operator logic with none of the computational advantages of RPN and an amplified form of the awkwardness. RPN's initial awkwardness was easily overcome once the way to use it to route through calculations was acquired, but that was never true of the PFO method of the Sinclair, which was a pleasure to hold, but not to use. What Sinclair seemed to be good at doing was recognising or creating a market, but not developing it.

I still have one in its original case and cardboard box aswell as the instruction manual.

It belonged to my brother who attended Christ College Brecon and he has written his class number inside the front cover.

It still works perfectly and is in excellent if slightly used condition.

A piece of scientific history.

Prepare to be amazed: Ken Shirriff has reverse engineered the code (from the chip), commented it, written up the algorithms, and presents an in-browser emulation of the calculator at http://righto.com/sinclair

EdS: Thanks for the link. In my view it's a doubly impressive feat: both the original code and the reverse-engineering of it.

Everyone: if you are at all interested in seeing what it took to get scientific calculator code into a four-banger code space, you should read the article @EdS points to. It's well worth it.