(One in a continuing series on the slide rules I own. [list])

The class of slide rule I really enjoy looking at and using are what you might call the mega-scientific duplex rules. These have a large number of scales (I’ll get to the Big Daddy of them all, the huge, stunningly beautiful, yet faintly ridiculous, Faber-Castell 2/83N Novo Duplex with its 30 scales soon), scattered over both sides, and are generally from the very last era of slide rule manufacture, when the electronic calculators were bursting in on the scene. So, think very early 1970s.

Enter the Nestler 0292 MultiMath Duplex rule from Germany, dated around 1970, which my mailman has just delivered. Here’s the log side with the folded C and D scales: 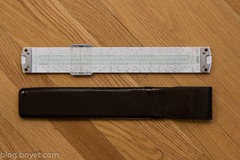 And here’s what might be called the trig side, although it also has powers of x: 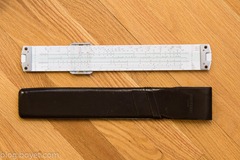 As you can see I got the thin leather case with this rule, but no manual. (There’s a scanned manual [pdf] at the International Slide Rule Museum.)

Do you own a "Faber-Castell 2/83N Novo Duplex" ? - I just checked and yes that monster is here on my shelf!

My dad bought it years ago - he was an electronics engineer. I used a Faber Castell 57/88 Students Advanced Rietz myself - and bought my first electronic calculator second-hand in 1976 - from an engineering undergrad at Bristol University who was upgrading to something better.

@DougCuk: Indeed I do own a Faber-Castell 2/83N Novo Duplex, and, yes, it is a monster in its hard plastic case. I really must get round to photographing it and talking about it...