Last week I finally buckled and went to see my doctor about a pinched nerve in my shoulder. It had been bothering me for weeks – but I was sure that after yet another good night’s sleep or a day’s gardening work it would be gone. But no, so off I went to my GP (as we say in England) and the only outcome was the need for physical therapy. And an appointment for a physical check-up. And… an appointment for a colonoscopy.

It seems that colorectal cancer is the “third most commonly diagnosed cancer in the world” and “it is estimated that worldwide, in 2008, 1.23 million cases of colorectal cancer were clinically diagnosed, and that it killed 608,000 people.” (Quotes from wikipedia.) The earlier you are diagnosed with colorectal cancer, the better your chances of eradicating it with (fairly) simple surgery before it metasizes.

Not only that but it seems that those at a higher risk of contracting it are (a) over 50, (b) male, and (c) have two or more alcoholic drinks per day. Meaning that I got a maximum of three points on the old score board.

Off I went to Associates in Gastroenterology here in Colorado Springs to arrange for the procedure and for the reams of paperwork. And the prescription for the “Bowel Prep Kit”. 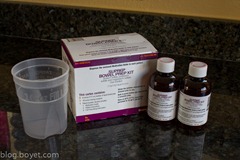 What’s this for, you might be asking? Sounds rather, er, ominous. Well, the way the colonoscopy works is that a video camera on a flexible tube is inserted in your colon and pictures taken of your colon walls. The doctor is looking for cancerous growths and polyps which can be biopsied and tested. To do that, your colon must be clean, and that’s what the bowel prep kit does: it cleanses your colon (in fact, your whole intestinal tract). And how does it do this?

Step one: no food for 24 hours prior to the procedure. So, Monday I had a hearty breakfast before 8am after a great spicy Indian meal the night before (think about it…).

Step two: around 4pm, I took the first bottle you see there, poured it into the measuring jug, topped it off and mixed with water, and drank it. Sounds easy, huh? Well, let me tell you that although the list of ingredients states “flavoring”, it is joking. It is pulling your leg. The people who devised and bottled this were chortling at your discomfort. This stuff just tastes awful. You can’t drink it all at once – I was warned that this might cause vomiting – so you drink it over the course of an hour. (Not me: 90 minutes was the best I could manage.) Then you have to drink two 16 fl. oz glasses of water over the next hour. Here’s what then happens, according to the ever so helpful booklet in the box:

Sulfate salts [the drink consists of a mixture of sodium, potassium and magnesium sulfates dissolved in water, essentially] provide sulfate anions, which are poorly absorbed. The osmotic effect of unabsorbed sulfate anions and the associated cations causes water to be retained within the gastrointestinal tract. [Got that? You have a quart and a half of liquid in your intestinal tract and it ain’t being absorbed…]

The osmotic effect of the unabsorbed ions, when ingested with a large volume of water, produces a copious watery diarrhea.

And that, my friends, is the understatement of the century. You basically lock yourself away in the bathroom for a while. Montezuma’s Revenge has nothing on this.

But you’re not finished! At least four hours before the procedure (and at least eight hours from the previous one), you have to take the second bottle in the same manner. Since my colonoscopy was at 9am on Tuesday (and I had to be there for registration and preparation at 8am), that basically meant I got up at 3:30am to drink the remainder (I was certain I couldn’t best my previous time and you can’t drink anything later than two hours prior to the procedure). This was the hardest part: I could remember the taste of the previous bottle vividly – in fact, I can almost taste it now – and downing another 16 fl. oz of it was difficult. By about 5:15am I was done and could guzzle the two glasses plus of water to wash it down.

Then of course it was the same drill as before, but by this time it was coming out pretty clear. I’d essentially hosed my insides down by this stage.

The procedure itself was pretty simple. It takes about thirty minutes (the colon is between a meter and a meter and a half long and they need to check it all), but you’re anaesthetized and don’t notice. Afterwards as you recover and wake up, they print off a cute little page of photos of your colon so you can, what?, hang it on the wall? (Or as the nurse said, post it to Facebook.) The one bizarre thing about the process is that they need to inflate the colon in order to get the camera-on-a-tube up there. To do this they use air. Which is all fine and dandy, but it’s difficult for them to get it out again, so you wake up with this inflated colon and the irrepressible desire to fart. And let me tell you they are gloriously relieving, noisy, odorless farts too. You revel in them.

For me, the results of the colonoscopy were negative. I had no cancer lesions, no polyps. My colon looked like the best tripe à la mode de Caen. I was clean (in more ways than one). The American Cancer Society recommend having a colonoscopy every ten years (providing the previous one was negative), so I’m now done until 2022.

But enough about me. If you are of a similar age (and score highly on my scoreboard) and haven’t done so yet, go to your doctor and arrange a colonoscopy. Yes, it’s a little uncomfortable for 24 hours, but it’s the simplest way to check for colorectal cancer. It’s one of those cancers that is more to do with your lifestyle rather than your genetic history. Don’t be one of the 600,000 plus people who die from it every year. Get checked now.

My life is so much richer from having read this! I mean, after the sliderule post, this on just moved (oops! too soon?) me to such an extent!

I just downed my first bottle followed by 2 16oz cups of water. Wish I'd have known I could have a hearty breakfast, i have one more bottle to go within 4 hours of my procedure. It's 3pm Sunday and my procedure is 9am Monday. I'll be plenty hungry by the time they finish.