"Nothing To Be Frightened Of" by Julian Barnes

I picked this up the last time we went to England in September, and I was half way through it when I got the phone call from my sister in mid-December that my Dad had been admitted to hospital with a heart attack. 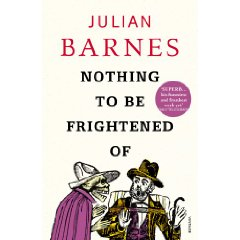 The book is not a novel, but a non-fiction book that explores, amongst other things, Barnes' attitudes to death, God, art, the fallibility of memory, and Jules Renard. It's partly autobiographical, especially about his relationships with his parents while they were growing up and when they died, and his relationship with his brother, who's a philosopher, and partly an exploration about how people, generally French writers (Daudet, Flaubert, and the aforementioned Renard) and particularly himself, felt and feel about death. The book is at times hilarious, at times very thought-provoking, at others — paradoxically — calming.

There is no way, given the circumstances that happened half way through my reading of the book, that I can review this book at a distance. To be blunt, the second half affected me deeply: I finished it in the week I was in England before my father had his second heart attack and died. The book grew into a personal diary almost, and I felt along with Barnes his reactions to his mother's death (I mean, heck, we have the same first name after all). Resonance is all.

Barnes, it seems, is terrified of death, of the thought of just not existing any more, of the total annihilation of himself. He doesn't believe in God — neither do I — although he admits that he misses Him (I do not). He does not believe and cannot be comforted by the fiction that after death we go to heaven and live there eternally. He expands on this annihilation and guesses that, since he's a fairly well-known author (I've been reading him since Metroland, his first novel in 1980), he'll be known until for possibly another 150, maybe 200 years tops. The entity that is "Julian Barnes" will vanish at that time because no one else will read him, and indeed there's a hilarious section where he imagines the last person to do so:

My last reader: there is a temptation to be sentimental over him or her (if 'he' and 'she' still apply in that world where evolution is taking our species).Indeed, I was just about to make some authorial gesture of thanks and praise to the ultimate pair of eyes — if eyes have not also evolved differently — to examine this book, this page, this line. But then logic kicked in: your last reader is, by definition, someone who doesn't recommend your books to anyone else. You bastard! Not good enough eh? [...] You don't deserve me. Go on, fuck off and die. Yes, you.

The book made me think, putting myself in his place, what do I feel about death? We have the same first name, roughly the same age (OK, he's 11 years older), both grew up in England. He writes about things that resonate (that word again) with me, including living in France. Sure, our careers are different; I concede the point. So what do I think about death?

Before Dad died, I can't say I really thought about it that much. By no means, did I do as Barnes does, screaming into my pillow with the terrors of the night and of death, but certainly, I knew that one day, the entity that is Julian Bucknall will just stop. The memories, the feelings, the thoughts will all vanish. Possibly that's why, to my wife's chagrin, I'm an avid hoarder: if my things survive my death then so will I.

Of course, it's a load of bollocks. After Dad died, I spent a couple of days going through his papers and the finances for my mother. He did everything for her, and now she was going to have to live on her own, and my sister and I wanted to make sure that she would have no money problems. There was a plastic bag full of old documents, passports, demob papers, cartes de séjour, even a vet's inoculation booklet for one of our cats from way back when. And in glancing through them, I realized that my memory of my own history was wrong in some details. If I can't even remember the minutiae of my own life, how is it even possible to remember my Dad and keep his memory alive? Barnes ran into the same conundrum: his brother and he have different, conflicting, memories about what happened at certain events and times in their family, about who their parents were and what they did.

Even though I'm "known" in the business I work in, how long will that knowledge survive my death? Certainly not as long as Barnes. I have no children, but I'm sure my nieces will remember me for a while, but once they die, that's it. No more Julian Bucknall, no one to remember me. I wonder/worry about the short-term stuff as well (should I put something in my will to keep this web site hosted and running for a few years after my demise?). After this web site goes, there goes my online presence and that's of major importance in these days of the internet and social applications.

Of course, now that Dad has gone, I think about death more. His father died at roughly 75, my father at 76: perhaps that's a hard limit for males in my branch of the Bucknall line. In which case, I have, what?, 24, 25 years to go. Concentrates the mind doesn't it? What would you do if you had 25 years left to live? Seems a long time, nothing to worry about, but I can tell you it's not. But do I fear death, like Barnes, or like Philip Larkin did? No, I'd have to say I don't; I'm more aware of it certainly, but I'm not afraid. For me, there is nothing to be frightened of.

As it says over there in the sidebar (at least if you're reading this on the blog), I fancy myself an amateur photographer. It's possibly the only artistic thing I can get close to saying I can do, unless you count hand-crafted code as artistic. To push