Reapplying for my UK passport

In February next year – not too far away at the time of writing – my UK passport is due to expire. Although I am now permanently living in the States, and have been for over 25 years now, both the US and the UK allow for dual citizenship so I have two passports. And I kind of like having a UK passport. For a start, it’s easier to enter the UK whenever I (or we) fly into Heathrow for business or a holiday, and it’s still good for entering the EU. Well, OK, true enough, only just, with regard to that last point. 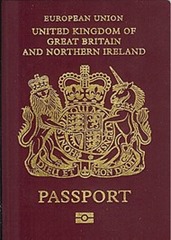 So, I Googled how to do it. Ten years ago, the last time I renewed, all I had to do was send off the nearly-expired passport to the consulate in Washington, DC, together with the required fee and completed form, and wait a little while for the new one to arrive back. Now, though, the whole process has been ‘streamlined’. Basically the whole application is an online form, together with the ability to upload a headshot (there’s a whole list of rules about how you should look, what the background can be, etc). I did all that, paid online, no problem. Then I had to send my old passport to HM Passport Office in Durham, in the north of England.

Fine, off I went to the Post Office nearby with my envelope containing all the required documents, and sent it off via tracked international mail on December 12. Simple!

Five days later, I checked and saw that it had gone through Denver to San Francisco, through their International Distribution Center, and from there had arrived at Heathrow. Yay, it’s in England!

This morning, I got an email from HM Passport Office saying that they were still awaiting my documents. WTF? I checked the tracking: the last entry was still ‘Heathrow’. I phoned the Passport Office to say it’s out of my hands and maybe it’s lost, blah blah. I spoke to a knowledgeable person who said, yeah, holidays, Christmas postal rush, etc, try checking the Royal Mail website with your tracking number. Which I did while he was online. It’s with ParcelForce they said, so I went to that website to check there. And there was the latest news: it had just been released from UK Customs. That very morning. What it had been doing for the previous 10 days I have absolutely no idea. Some Christmas rush indeed.

Anyway, it’s now on its way to Durham, to arrive probably Monday or Tuesday. Which is of course New Year’s Eve and therefore more delays. My operator said that it would probably get processed and sent out the first full week in January. We’ll see.

And... I finally got my new passport yesterday, January 20. Just in time for my trip to London on Saturday. Wheeee!