Amazingly, my most popular post here on my blog has nothing to do with algorithms or data structures or Javascript or indeed anything to do with programming. It’s a post I whipped up 3 years ago about buying my wife’s Acura off the lease and then getting bombarded with dodgy and scammy “Auto Warranty” postcards and letters.

Well, it happened again. Not because of buying a car off a lease, but even better.

Quick bit of background: a month or so ago, my wife was called out to Fountain, which is just south of Colorado Springs. She drove down there in her Acura and proceeded with her callout, when she suddenly heard a bang followed by another and another, ad infinitum. She asks another person in that office what was happening and he told her, it’s a bad hailstorm. And yes it was, softball-sized hailstones. She was ‘lucky’ in that her car windows stayed intact, but the car was severely dented and the windscreen was smashed. 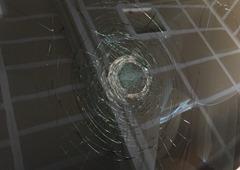 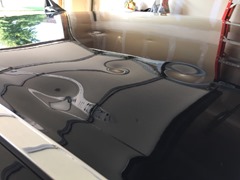 And the gotcha, as it were: the previous month I’d just paid off the loan I’d taken out to purchase the car off the lease. Ah well.

Naturally, I reported the damage to Progressive (our car insurers) – as did hundreds of other people with their claims, for sure – and after a little while, they concluded it was a write-off. The car was totalled. They towed it away (presumably to auction it off) and in return gave me a check for what it was worth. For us, it was no more and so we went and ordered another Acura from the dealership. It was built September 8 and we’ll get it next week.

Anyway, imagine my surprise when I started getting Auto Warranty postcards again. BETTER STILL: they were sent as pairs with different phone numbers on the back. EVEN BETTER YET: they were addressed to “Mark Julian” which is a nice flip on my name. Service warranties being offered in pairs, for a car that was totalled, to someone who doesn’t exist, who, even if he did exist, no longer owns said car. Oh the sweet, sweet irony. 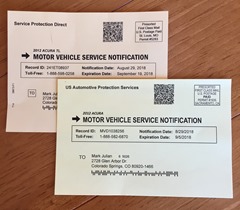 A pair of scammy postcards 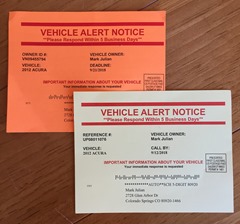 What a bunch of losers.