One of the kinds of art I really enjoy is art that shows off the draughtsmanship of cartographers, especially from the early 1900s or earlier. We have a small collection of framed old maps from places we most closely associate ourselves with: London, Derbyshire, Yorkshire, Normandy, Colorado. Road maps, railway maps, topographic maps. I find them utterly fascinating, tracing in my mind’s eye how the countryside has changed or the urban expanses filled out, squinting to read the names.

One of the examples I have is a page from The Gentleman’s Magazine from 1766. This was a monthly periodical that was published from 1731 to 1922 (the first such to use the term “magazine” in fact) and printed a summary of news, information, letters, and commentary, mostly about what was happening in Britain. Samuel Johnson, he of the astounding A Dictionary of the English Language, worked as a writer for the magazine for a while.

A 20-year stretch of issues of the magazine – from 1731 to 1750 – has been scanned and published online as part of the ILEJ project. They are engrossing to read, but can be opaque in places, what with all the long S’s and ligatures and abbreviations. Here’s a flavor:

The inhabitants of Westminster petitioned to the H. of C. [House of Commons] for the free fish market, like that of Billingsgate, in order to encourage fishermen, and reduce the price of fish ; and a bill was order’d accordingly.

Four petitions from the high sheriff, grand jury, justices of the peace, and gentlemen of Suffolk, met at the assizes and quarter sessions, were presented to the House, for an act to hold the former assizes at Ipswich ; as it is very unsafe, as well as expensive, to carry Smugglers and other prisoners as far as Bury ; to which place many gentlemen, and others, who are obliged to attend on business, have fifty miles to go ; and therefore, as Ipswich is even way more convenient, being nearer the middle of the county, etc. leave was desired to bring in a bill accordingly ; and a motion being made for that purpose, it passed in the negative.

Phew. Thank heavens the printer’s long S disappeared, it’s way too much like a lowercase F: fiſh, aſſizes, buſineſs, and so on, so forth.

Anyway, in one of the issues for 1766 this map appeared: 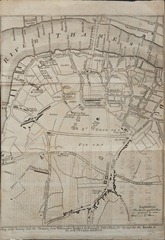 It’s a lovely map, despite the visible ink shadow from the other side in the lower half, and shows a good part of Southwark on the South Bank. It depicts some possible new roads to be built to connect the new (it was still being built) Blackfriars Bridge in the north to the main routes to Surrey and Kent in the south. (The bridge opened in 1769.) If you look carefully at the north end of the bridge you can see where the River Fleet empties into the Thames. Presumably there was an article that went along with it to describe the choices, although I don’t have it.

The map is full of fields and gardens, with Lambeth Palace and Westimster Bridge just visible. The closer to the river you get the more built-up the area becomes. There are some lovely names of places and streets and businesses, redolent of the times: Johnny Groots; the Dog and Duck, clearly marked at the junction of Lambeth Road and the Road to Clapham, Melancholy Walk, Dr. James’s Laboratory (I wonder what went on there?), Watson Calico Printer, Hay Market with a little icon of a windmill by it. The river has the various quays and landing stages clearly marked: Arundel Sta. ("Sta." is short for stairs), Surrey Sta., Essex Sta., Morris’s Causeway, Paul’s Wharf, and the like.

After a while of looking at it, you want to see what the current place looks like, how things have changed. Did any of those roads get built and survive to this day?

My plan was to superimpose a current map of the area over this one, so that the old map bleeds through. Not entirely successful, I’m afraid: 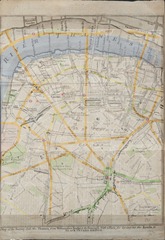 The main reason is that the current map is dense with streets. Southwark has changed incredibly in the past 250 years. It is extremely built up when compared to the old days, and in the building frenzy of the 19th and 20th centuries, entire streets were thrown away to be replaced by others. Some new streets took on an old name, even though they were in different places (look for Maid Lane, which became Maiden Lane). And some streets are still there: Red Cross Street had a slight change to Redcross Way, but Dead Man’s Place (where it ended) is now Park St. Part of the building changes were due to the construction of the railways in early Victorian times. Whole swathes of Southwark are now under rail: there’s Waterloo Station to the west and London Bridge station to the east. The position of the old Blackfryars Bridge (it only lasted one hundred years) is now where Blackfriars Rail Bridge is.

The other incredible thing is the direct result of Bazalgette’s remarkable plans to construct a modern sewer system one hundred years after this map was published. If you look at the present course of the Thames compared with the old map, you can imagine the monumental work that went into building the Embankment on the north side in Victorian times. He narrowed the river quite a bit with this construction, and some of those stairs I mentioned became streets instead (I went to King’s College, which is just south of Somerset Garden on the old map, and to one side of it is Surrey St, roughly where where Surrey Stairs are depicted).

The other fascinating part of the map for me (because I used to live in Camberwell to the south and hence travelled through it a lot) is the Elephant and Castle. On the old map it’s already pretty built up with several houses marked, although at that time, the name “Elephant and Castle” was an informal name for the village – it was the coaching inn there – the official one being Newington. It amuses me a bit to think that the Metropolitan Tabernacle is built on the site of the Fishmongers’ Alms Houses. I know, I know, I’m easily pleased.

Next time, I’ll briefly talk about how I photographed the map: it’s still in its frame.