St Julian to the rescue

During these pandemic times, I’ve been changing my cover photo on Facebook every weekend to show some photo of where we’ve been in the past. Once we get to travel again – we’re both fully vaccinated, so it’s only a matter of time! – I’ll revert to photos every fortnight that I’ve taken on our trips. But for now, I just post some older photos. 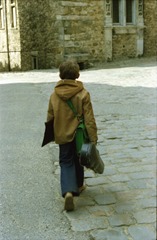 The latest one was of a boy walking in front of me, carrying a violin and a couple of cases. It’s scanned from a negative, and my original guess was probably some time in 1980. And that would make this boy to be now in his late 40s, maybe even 50.

The previous images in the film strip were of the interior of a cathedral, and ever since I scanned these negatives some 8 years ago, I’ve assumed that the cathedral was that of Canterbury. It was the only cathedral I remember visiting way back then.

But where in Canterbury was this? I pop open Google maps, switch into satellite view, popping in and out of street view, and go on a search. After about 20 minutes, I’m completely baffled. I can’t find this stone building you can see in front of the kid, especially considering that distinctive window. Nowhere. I try finding a couple of other views that I’d obviously photographed at the same time. Nothing.

Maybe I took it on the way home to London (although that would have been stretching it a bit). Rochester, perhaps? It was fun using Google Maps to take a look at Eastgate House where the photographer took pictures of my Volvo 1800S back in 1990 for the Classic Cars Magazine 1991 calendar – no longer can you drive up to that side door, it’s all gated now. But aside from that, nope, it wasn’t Rochester. 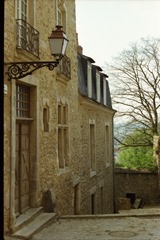 I browsed some of the photos taken at the same time. There was one of an old city wall, so back to Google Maps satellite view to browse along the city wall in Canterbury. Nope, not the same wall at all. The one before that photo on the strip was one of a very French-looking house.

But wait! There’s a street sign mid-left there! I zoomed in and all I could make out was “Pierre”. What? It’s in France?

I zoomed in on the image of the stained glass. I’d obviously taken the shot without a steady hand or tripod – it’s not sharp at all – but I could make out the caption underneath the central figure of a saint. “S.IVLIANVS” or “St. Julian”. This time it was off to Google Images looking for “St Julian stained glass” and bingo! It’s from the Cathédrale St-Julien du Mans. Holy cow: I’d completely and utterly forgotten that I went around the cathedral when I visited the Tirouflets. No recollection of this at all.

Then it all fell into place. I was able to match my interior photos of the cathedral with online ones of the same views. This was in Le Mans, not Canterbury.

Of course, at that point, it was back to Google Maps and satellite view and street view to identify where all those photos I’d taken actually were. Let us just say the old town of Le Mans is just beautiful. No wonder I wandered around after visiting the cathedral. That French house was on the small street named Rue du Petit Saint-Pierre. I’d also taken a couple of photos of Cour d’Assé, which is strikingly beautiful.

And the boy violinist? Where was he? Just outside the cathedral, as it happens. He was walking north along the Place Saint Michel with the Palais du Grabatoire in front of him with one of the stairs (escaliers) disappearing downwards in the left.