The Tombs of Delphi?

So here we are: yesterday was the last day of June 2021 and I’ve suddenly remembered that my book The Tomes of Delphi: Algorithms and Data Structures came out in June 2001. Twenty years ago.

I’ll admit though, it is somewhat hard to recollect how it all got written. It certainly took over a year to complete, I remember having to fit it in with my work at TurboPower Software and also the monthly column pieces I was writing for The Delphi Magazine (some of those prompted me to write the book in the first place, of course). I remember Orpheus, our big tabby cat at the time, loved to lie on my big CRT monitor while I was typing away. But eventually it was done; I sent it off to Wordware, the publishers; it was proofread and corrected; I got a loose-leaf review copy which I went through thoroughly and marked up and sent off my amendments (the box containing that marked-up review copy is probably somewhere in my basement); and then a month or so later in that June I got my three copies of the printed book and it went on sale to the rest of the world. 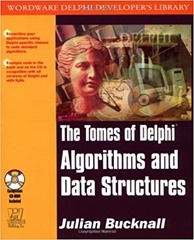 If I recollect, the first three or four months of sales were pretty good, and then the sales chart dipped as I’d expected. From this point in time, I no longer have any idea how many books were sold during that period. Anyway, some four years later, Wordware got bought out (or something like that) and I was offered to have the copyright returned to me. Which I did of course. I then updated it to a certain extent, formatted it to work either as an e-book or a printed one, and in mid-2006 I put it up for sale on Lulu and on Amazon (15 years ago!). 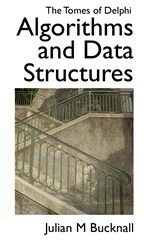 Since then, nope, nothing much. I was thinking of updating it for generics, but Delphi’s generics aren’t that great.

Basically these days I sell maybe one or two copies a month. I took a quick look at what I’ve made from it over the past five years, for a giggle, if nothing else. On Amazon? I’ve averaged $68 in sales per year. Lulu? Much less: about $30 per year. So a smidge less than $100 per year, all told. (Fun fact: my pre-tax sales income via Amazon is just enough to pay for the use of AWS as hosting for my static websites.)

So what’s next for the book? That I don’t know. Option 1 would be just to leave well enough alone. Yes, I could update it, sure. But then again, I just don’t do enough Delphi these days. I just took a look at the code: Oy vey, it’ll even compile with Delphi 1 and Kylix (!), and the last time I updated it, it was for Delphi 7. Where are we now? Oh, yes, Sydney. To be honest, if I did update it, I’d just target the latest version of Delphi.

(Aside: yes, indeed, when I originally wrote the code, I actually had all those versions of Delphi installed somewhere so I could test it on every version! These days? Nope. Just the latest.)

I was thinking of “converting” it to JavaScript or TypeScript since I use them way more, but I just don’t think it’d be worth it. Certainly the thought of formatting a changed version for a printed book fills me with horror – how did I do it last time?

I still have my old copy (with the original cover). It was pretty good at the time I got it.

I don't use Delphi anymore, though (still sell software made on it, but haven't touched it in a while), I switched to C# a few years back.