I was chatting the other day with Paul Usher about the goings on in the UK and he suddenly veered off on a weird tangent. He’d heard a rumor that Tesla lived in Colorado Springs, which is where I live, and was it true? By that he meant Nikola Tesla, not the cars.

To which I replied that, yes, he did. I remember learning about it way back when, possibly when I first came to the Springs. I even could have pointed to roughly where his laboratory was, not that it still exists in any shape or form. Tesla lived here for a few months from 1899 to 1900 doing research into the wireless transmission of electrical power.

Of course that prompted me to do a quick bit of my own research.

First off, it seems that there is now a placard on Pikes Peak Avenue at roughly where Tesla had his lab. I nipped over to take a photo: 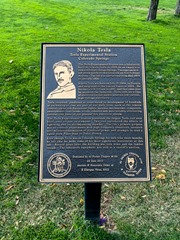 Let me tell you the North Foote Avenue that’s mentioned is purely residential now, a bit dilapidated as well.

And then, even better, I found this photo in the Wikipedia article on Tesla of the lab on Knob Hill in July 1899: 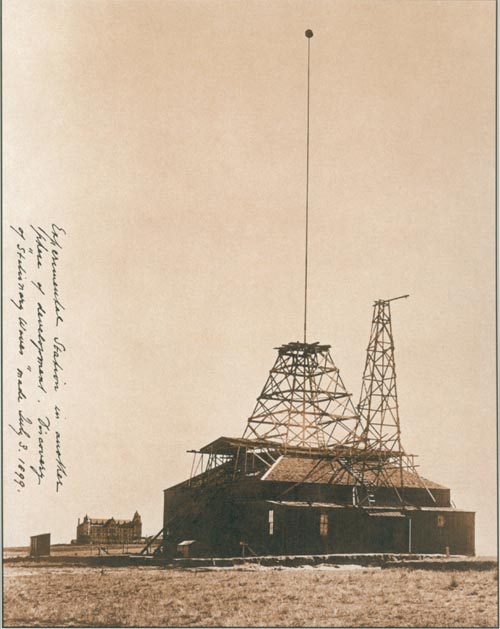 There in the distance is the Union Printers Home built in 1892. Of course nowadays both it and the whole area is houses and office buildings, except for Memorial Park (the placard itself is on the edge of the park).

I also remembered that there's a bit in the Christopher Nolan film The Prestige where one of the protagonists goes to visit Tesla (played by David Bowie, as it happens) in Colorado Springs. Had to laugh because that set of scenes looked nothing like Colorado Springs and certainly nothing like that lab on Knob Hill.