A long time ago, in a galaxy far, far away, I was in an amateur dramatics group called the Environment Players, so named because the organizers worked for the Department of Environment. Which no longer exists as such, as it’s now the Department for Environment, Food and Rural Affairs (DEFRA). Anyway…

I acted in several shows with them, the first few being in the Civil Service Theatre on Northumberland Avenue (which no longer exists as such, it seems), and the last three of which were in the Abbey Community Centre on Great Smith Street. (My final part for them was Captain Jack Absolute from The Rivals, in November 1992.) Last week I was helping out in our booth at the NDC London event in the QEII Centre, and there, right across the street, was Great Smith Street. Time to go take a walk down it, to see if I remembered anything. 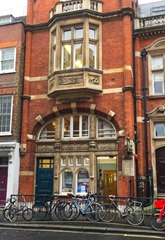 Answer: nope, not really, despite the Abbey Centre’s pretty distinctive outside features.

For example, I’d completely forgotten that the building housed what used to be the Westminster Public Baths in Victorian times. I’m guessing we went through that entrance and the auditorium was behind. I vaguely remember the stage and changing rooms, but apart from that, the intervening 27 years have blanked out that bit of my memory.

And then, on my way back to the QEII Centre, I spotted the street sign where Great Smith Street meets Victoria Street. And that, funnily enough, I do remember…