Sometimes you just gotta laff. It seems that, as of Windows 11 version 22H2, the default for console apps is now Windows Terminal and not Windows Console. So what? you may ask.

For the vast majority of my work, no problem. I’ve been using Window Terminal as part of the coding side of my life for a while now. However, there is one console app I use a lot – and have done for many many years (old-fashioned, moi?) – which just goes bananas in Windows Terminal: ZTree. 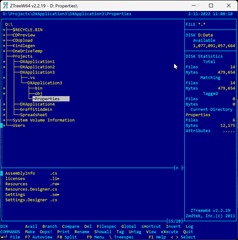 For those who may not have heard of it, a little bit of history. Back in the DOS days, there used to be a program called XTree, which was a file manager. A file manager that was way better than anything that pure MS-DOS could provide. It did this by providing a character-mode GUI that showed the directory structure on a drive as an expandable tree with other panes showing information about files and so on. It had the ability to even show the file data in a hex formatted display, which sometimes was extremely helpful in the kind of work I was doing at the time.

XTree went through a series of updates and company takeovers until it was retired/abandoned. ZTree was a clone of this app and expanded on its functionality a great deal. To be honest I use it mostly these days for search-related operations on files. It is way faster at this than Windows, plus you can quickly open a file that matches your search string and see how and where the matches occur. With Windows search, you’d have to start up some other app to actually see the data.

Example: recently I was looking through a bunch of projects for some specific usage of a JavaScript function. With ZTree, I open up the Projects folder, scan and tag all subfolders for JS files, and start the search. For every file that’s still tagged, I can open it up in ZTree and quickly view it. With Windows? Slowly (and I mean s-l-o-w-l-y) I’d get a list of files, and for each one I’d have to start up VSCode to look at the contents. Meh.

Anyway, it turns out that ZTree’s display code does not work in Windows Terminal. The display gets scrambled. I initially thought that my ZTree configuration was hosed, but after a bit of dithering around with setting columns/rows, etc, I Googled the issue. And, it turns out that the current version of ZTree needs Windows Console in order to work properly, but the latest version of Windows defaults to Windows Terminal for console apps. A bit more dithering, I worked out that I needed to change the properties on the icon I use to start up ZTree to use the following target:

Previously it merely had the reference to the ZTree app, but now it explicitly starts up Windows Console and then uses that to start ZTree.

Phew! Back to the familiar character-mode GUI I’ve known for so long!!!