While we were on vacation in England at the beginning of the month, we visited Rievaulx Terrace and Temples. This is kind of an 18th century folly, a landscaped terrace on the hill just above Rievaulx Abbey in North Yorkshire where the designer cut views in the woods on the slopes so that you caught glimpses of the ruins below as you perambulated through the gardens. To top it off, the owner wanted a couple of temples on the terrace as well: at one end the domed Doric Temple and, at the opposite end, the Ionic Temple. For rich-as-heck industrialists in the 18th century, about par for the course really.

We were delighted to find that the National Trust (who now own the property) had an exhibition of works by Emma Stothard there over the summer. She does these remarkable sculptures of woven wire or branches, some of which we’d seen the previous year at Nunnington Hall. Here’s an example of one of those: 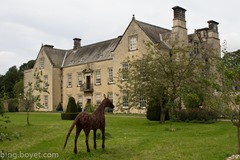 Well, in this exhibition she had some galvanized wire sculptures, that had a ethereal grey color to them. I’ve uploaded the set of photos I took to Flickr, you can see them here.

This photo in particular shows the way you can glimpse Rievaulx Abbey through the trees, down the slope. 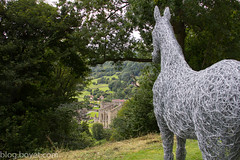 And this photo of the boxing hares shows the Ionic Temple. 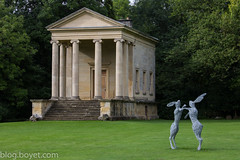 Now playing:
The S.O.S Band - Just Be Good To Me
(from On The Rise)