Once upon a time (well, OK, in the mid 70s) in a land far, far away (England), I went to King’s College, London as an undergraduate to study for a degree in Mathematics. Easy peasy, I thought, pure mathematics all day, every day. I could immerse myself in the realm of the pure thought, build up logical edifices, and marvel at how far we’ve come as a race. Not so fast, said someone just before I appeared for my first year, those mathematicians will leave here with a degree, but they won’t be able to function in the real world because they won’t know how to express themselves in writing. They ought to write at least two essays, one at the end of the first year and one at the end of the second. To make it easier for them the essay topics can be mathematics-related, so something like an overview of some branch of mathematics that’s not covered in the syllabus, a biography of the personality that produced some major mathematical result, something like that. 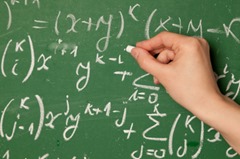 Hence I had to write a couple of essays as part of my degree. On something with a bearing on mathematics, but not part of the course. Graded on a pass/fail, but you had to pass.

I had a chat with my tutor, Dr Bushnell (now Professor Bushnell, and still there at King’s, I see), and we agreed on my writing an essay about prime numbers, ending up with the Prime Number Theorem, for my first essay. I spent some of my spare time in the department library at King’s researching and reading up about prime numbers (no Wikipedia in those days), and wrote a draft. Dr Bushnell read it and commented on it, and then I incorporated his edits and wrote it up again. I passed.

And by “wrote it up” I actually mean I wrote it in longhand. Neatly. On 9 pages of ruled A4, front and back. I had no access to a typewriter, but, besides which, have you ever tried to type mathematical expressions on a typewriter? In those days I had the utmost respect for the secretaries in the Maths Department. They were the biz when it came to typing up the exam papers and whatnot. Me? I wouldn’t have known where to start.

There it all lay until a month or so ago, when I was chatting to someone about prime numbers and the Prime Number Theorem and mentioned in passing that I wrote this essay. Said someone then threw down the gauntlet and dared me to type it up and post it online. After all with MathJax, I could even get it to look all mathematical and professional.

Fine, I said, let me do it and see how it goes. I started off typing it up in Markdown and MathJax, but there are some issues in getting it right when you have essentially two publishing libraries both trying to typeset the content at the same time. So I threw that out and basically created a single web page with some quick styles and published it: Prime Numbers by J.M. Bucknall. I also added a few asides, because, quite honestly, there’s more mathematics than text in places.

All in all, it took a good 10 days of work in the evenings, mainly because I was continually having to look up how to express certain mathematical expressions in LaTeX. Things like \( \mathbb{Z} \) or how to define the variable being integrated over with a roman 'd' and an italic 'x' (like this \( \int f(x) \, \mathrm{d}x \)). I’ll write up some tips and tricks that I discovered later. Of course, with other parts of the essay, I was trying to understand how the maths worked again; I obviously understood it at the time, but now?

In typesetting this essay, I relearned some mathematics, discovered other stuff that I probably never will understand again (I can’t see myself going back and redoing a maths degree now), and became aware of how atrociously I wrote in those days. I’ve become a lot better at writing, but I doubt very much it had anything to do with these essays I had to write as part of my degree.

Now playing:
Deacon Blue - That’s What We Can Do
(from The Hipsters)