A photography topic this time: HDR photos. HDR stands for High Dynamic Range and is a set of algorithms that attempt to widen the range of detail in a photo from the darkest shadows to the brightest highlights to more closely mimic what the human eye can see.

Here’s an example I created from our last trip to England: 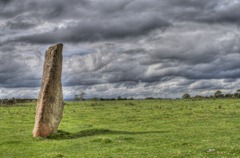 It’s a photo of Long Meg, the keystone of a large neolithic stone circle in the Pennines.

Notice the artificiality of the lighting. The problem is that the screen you are using to view the picture has a light range of about 10 stops (each increase in a stop value doubles the amount of light). The camera I used to take it on has a range of 11 stops: the sensor has twice the dynamic range of a typical screen (think about that for a moment – the camera captures more light information than the screen can show). The human eye, on the other hand, has a dynamic range of some 14 stops. What HDR does is to use several shots of the same scene (I used three, which is the usual number): one exposed normally, one underexposed by one or two stops (this will capture highlights), and one overexposed by one or two stops (this will capture detail in shadows), and then merge them in some algorithmic sense to produce an image that has a wider dynamic range. This image’s dynamic range is then reduced to fit in a JPG to produce these bold, almost surreal images. (I use a program called Photomatix to do this merging process.)

The process is quite fascinating and I’ll admit there are much better examples on the Internet than I’ve been able to create. My problem tends to be that I must remember to take a tripod along with me, otherwise the three source photos will “shift” slightly from being hand-held. Photomatix does cope with that to a certain extent, but better safe than sorry.

(I write a monthly column for PCPlus, a computer news-views-n-reviews magazine in the UK (actually there are thirteen issues a year — there's an Xmas issue as well — so it's a bit more than monthly). The column is called Theory Workshop and appears in the Make It section of the magazine. When I signed up, my editor and the magazine were gracious enough to allow me to reprint the articles here after say a year or so.)