This was one of those articles where I had to start from scratch with my research: I knew pretty much nothing about the subject. Sure, I was familiar enough with those photos of real buildings that looked as if they were made as a model on the kitchen table, but I had no idea how they were produced. I’d assumed that it might be some kind of digital post-processing of a photo, but I didn’t have any idea that you could purchase special tilt-shift lenses for DSLRs.

I start off with the universal problem of photographing tall buildings: in order to get the top of the building in along with the bottom, you are forced to angle your camera upwards to fit it in. And that leads to the vertical lines in the view converging upwards. Enter the old view cameras, where you could shift the lens up or down (or side-to-side) rather than the camera itself, the bellows that connected the camera to the lens ensuring ease of movement and the blocking of light. In fact for architectural photos these cameras are still in use today.

For SLRs and DSLRs, there is no such thing as bellows between the camera and lens, and so there’s evolved a similar setup where the lens will rotate or slide in front of the film plane. Compared to normal prime and zoom lenses, they tend to be expensive. I must admit that, while I was writing this article, I thought about finding and buying a secondhand one for my Canon DSLR. But, even secondhand, they command a steep price. (As an example, the 24mm Canon TS-E L Mark II lens is around $1500 secondhand, which, for a lens I’d probably not use all that much, is a little out of my price range. But maybe one day.) 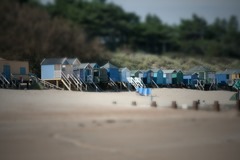 So if the physical accessories are so expensive, is there any way to fake it? The answer is yes, and you can see an example alongside. This is a normal photo I’d taken on one of our vacations to England, and is ideal for a fake tilt-shift effect: the area of interest is a small band in the middle of the image. Enter Gaussian blur, especially a derived specialized algorithm that applies more blur the further away from the area of interest. This gives the effect of the foreground and the background being out of focus, providing the illusion of a tiny scale. I quickly discuss the mathematics behind Gaussian blur, including a quick way to calculate an approximation to it.

(While I was writing this article, I wrote a blog post about tilt-shift here, further expanding ideas for digital processing of photos.)

(I used to write a monthly column for PCPlus, a computer news-views-n-reviews magazine in the UK, which sadly is no longer published. The column was called Theory Workshop and appeared in the Make It section of the magazine. When I signed up, my editor and the magazine were gracious enough to allow me to reprint the articles here after say a year or so.)