Donna just sent me this link to a news article about Irv Gordon approaching his 3 million mile goal in his original 1966 Volvo 1800S. He’s only 40,000 miles away. Blimey.

Now in mine, I’m nowhere near that (of course, he adds, obviously), but I’ll point out that mine is the second one I’ve owned. My first one was a 1969 model (normally aspirated, two-litre) that I owned in England before I came over to the States in 1993. Chassis number 29898. I eventually had to sell it in 1998 when it became obvious that I wasn’t going to be returning to live in England any time soon and I didn’t want to saddle my parents with storing it any more.

A couple of years prior to all that though, my car was selected by Classic Cars magazine for their 1991 calendar. I spent a day in Rochester in Kent with the photographer (I can’t remember his name, unfortunately) having my car photographed at the castle, down by the river (including driving onto this very rickety-looking wooden pier for a real atmospheric shot with boats and gulls and whatnot), and also at Eastgate House, erstwhile home of Charles Dickens at some point. The photo taken at Eastgate House was the one selected for the calendar. (The photo you see below is not that great: after all it is a photo of a printed photo, which is framed behind glass.) 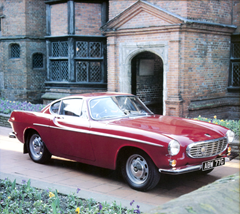 (This blog post has a great view of the house from roughly the same angle we used for the car.)

For comparison, here’s my current one from roughly the same angle: 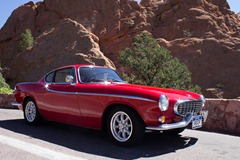 Quick notes: the car was all original, so has the correct Volvo wheels and hubcaps (and the photographer wanted these to be the right way up for the photo, requiring me to pop them off and put them back on for every new place). Unlike my current one, the chrome strip down the side is straight rather than curved, as is the front bumper. The grill is different as well: my current one has the rare “eggcrate” aluminium grill. Since it was a pre-1975 model (I think that was the cut-off year), it could have the original-looking white-on-black number plates and not the modern reflective ones (and that caused a problem: the photographer could not photograph the rear of the car since the square old-style plate for the back hadn’t arrived the day of the shoot). Of course, the car is a right-hand drive car.

For a hoot, here’s a scan of the ad for the car (I think it was in the Evening Standard) that I responded to. This must have been in 1989: 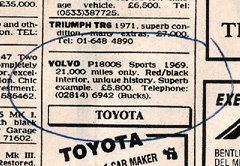 I forget what the “unique history” was, but there was no point negotiating with the owner to get the price down. I paid £5,800 for it. (Aside for phone number historians: this was in the days when London numbers were 01-something.)

Those who know me in Colorado Springs will recognize that my Audi has the same ABW 77G registration, albeit with the Colorado size and colors.