I’ve been a bit remiss in posting these photos, but a friend reminded me yesterday that I’d promised to show off my “new” car.

Way back when I lived in England I owned a red 1969 Volvo 1800S, a rare B20B version (that is, a 2000cc, non-fuel-injected engine). Only 1693 were ever produced since Volvo brought out the 1800E pretty quickly with a fuel injection system added (E stands for einspritzung, the German for fuel injection, since the system used in the Volvos was produced by Bosch).

That car was nice-looking enough that it was the October picture in the Classic Cars calendar of 1991. It was a fun day I had with the photographer, driving all over Rochester in Kent, trying to get the perfect picture. The one published was taken outside Eastgate House in Rochester High Street, although we drove up to the castle and down to the Medway as well. I’ll post a photo of that calendar page later.

Once I moved to the States in 1993, I had to sell it. I couldn’t afford the shipping to Colorado and the car needed to be driven and looked after otherwise it would just have rotted away. So in 1995 I finally found a buyer and sold it and silently regretted it.

Anyway, I’ve been looking for a reasonably-priced red 1800S for the past year or so, one that has already been restored. I finally found one in California in July, a 1964 version with a B18B engine, and bought it one of the weeks I was in the DevExpress offices in Glendale. I had it shipped to Colorado (no way was I going to drive an unknown car 1000 miles home, especially one that had only been driven some 200 miles in the last 5 years). This was it on the Friday it was delivered: 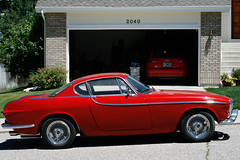 The very next Monday I took it to Concours Cars in Old Colorado City for them to thoroughly check it over and retune it for the altitude. And it was a good job I did too: the heater core had a leak and the car was losing coolant like there was no tomorrow. (Boy was I glad I hadn’t decided to drive it back from California.)

In the end, they kept it for nearly a month fixing various systems and bits and pieces and replacing oil, fluids, belts, etc. I’m going to guess that whoever restored it ran out of money after doing the bodywork and rebuilding the engine since there were quite a few minor problems, apart from the heater core leak. Egregious examples: the headlights weren’t connected to the switch; the cable for the flap for the defroster was missing (besides which the flap itself was broken); there was no windscreen washer system at all apart from the nozzles. They also decided that the carburetor needed to be replaced (whatever fuel additive the previous owner had used had rotted the jets while it was in storage). There’s still a few little things to fix (which they’ll be doing over the winter), but at least they made sure the car was drivable and legal to drive.

Here’s the front, showing the cowhorn bumpers and the aluminum “egg-crate” grill (and the crappy “VOLVO” plate that is screwed on with some security screws that will have to be drilled out): 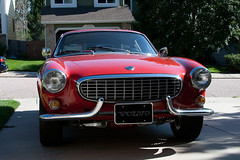 And here’s the rear, showing that I still need to register it in Colorado. The plate reads “64SAINT”, because it’s a 1964 car and The Saint, played by Roger Moore in the TV series, used to drive one in the 60s. I might go for the same plate here, if it’s available. 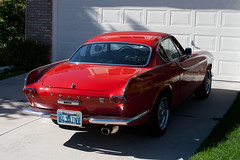 (You can see my set of pictures of the car on Flickr. I’ll keep updating it as I take more photos.)

Let me just say that the car is just awesome. It’s great fun to drive around town, even without power steering (the steering wheel is huge though and my upper body strength is improving!). Now I know how the automatic choke works I can even start it from cold without cranking and cranking the starter. It gets a bit noisy on the interstate (besides which I don’t really go above 60mph in it until the rebuilt engine has had a chance to settle down) and turning the air conditioning on just makes it noisier still. And the wheels are too gaudy for my taste (going to go for some Panasports later). But... overall, it’s just brilliant.

"The Saint Volvo" (as we in Finland call it...), that one is so cool and elegant! One of the most beautiful cars ever made (IMHO)

OK, I'm just a tinkerer, but that's a new one on me. Anyways, usually jets are independently replaceable (they need to be, as one of the basic carburetor tuning techniques is changing jet sizes to adapt the carb. to the engine, exhaust, intake and altitude).

It's kind of odd that rot (who says "rot" instead of "corrosion" -- must be one of those funny Euro-mechanic terms) in your jets of all things would require a completely new carb.