Taking the Volvo 1800S out in snow

Overnight, it wasn’t exactly snow falling so much as fog freezing. There was snow left over from the past couple of days, but the roads were clear and the freezing fog had covered the trees with a sugar dusting of white. It was also very cold overnight: around –12C or 10F. 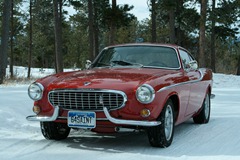 The car park was deserted when I arrived and, as you can see, still covered in snow. 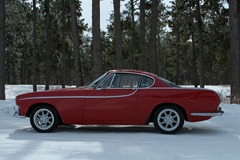 The sun was peeking through the trees, but unfortunately they were protected enough that the freezing fog had missed them. 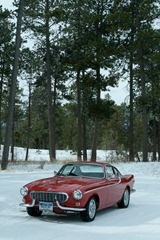 By that time, someone else had arrived to walk his two dogs and we had a chat about Volvos. He had a Volvo S60, but had never seen an 1800S. 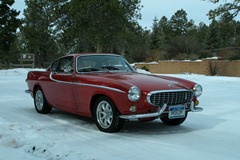 After that the sun was starting to hide behind clouds, so it was time to return.

I’d have to say that even though the temperature still hadn’t reached much above –8C, the car performed beautifully. Getting used again to a rear-wheel drive in the snow took some doing though: I did a nice drift when I entered the car park from Milam Road.

One of the most beautiful cars ever, and good pictures of it...