On Saturday 18 June, I attended the VCOA (Volvo Club of America) National Meet in Lindsborg, Kansas, to show off 64SAINT, my Volvo 1800S. 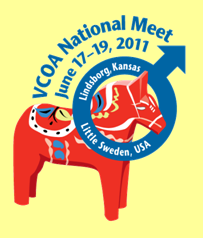 Sounds simple enough, except how was I going to get there? It was 440 miles “door-to-door”. Was 64SAINT up to it? A week or so before the trip, I had Concours Cars service the car and also get rid of the crappy boy-racer exhaust (why, oh why did the guy who restored it damage the look with this monstrosity?) and replace it with a dual tail pipe more-in-line-with-how-it-should-be exhaust. They gave me the thumbs up: the car was ready.

As it turned out the trip there on the Friday was just fine. It’s practically a straight line east on highway 24, then I70. I had lots of admiring glances and waves along the way (including one truck driver who nearly drove off the road because he was looking at me in his rear-view mirror). It took me 6 hours 36 minutes to get to the Marriott Courtyard in Salina (just up the road from Lindsborg), with two stops for gas; fine sunny weather all the way. Overall, the mileage was 28.4 miles per gallon, and I was doing 70mph on the interstate. Mind you, I didn’t turn on the air conditioning until the final couple of hours.

Once registered at the hotel, I took the car to wash it: lots of bugs had sacrificed themselves on the windshield. The weather was oppressively hot and humid and by the time I’d leathered off the car I was drenched with sweat. Back to the hotel, quick (cold) shower, and then out to dinner.

The next morning the car was all dirty again: it had rained in the night. This time I quickly leathered it down with my wet chamois. It turns out though that it was worse than rain: it had hailed elsewhere. One of the owners had even had his car damaged slightly. Scary stuff. Anyway, I drove down to Lindsborg (nicknamed Little Sweden USA for various reasons), and parked the car in my allotted spot, thankfully in tree shade. Another quick polish, and it was time for the show. 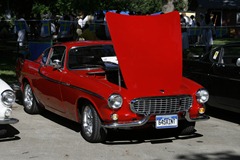 For the next four or five hours I spoke with a whole bunch of people: other owners and spectators. Owners just wanted to know how good the air-con was; the general consensus was not very well. There was talk about this coolant versus that coolant, arcane knowledge that I am not privy to. Spectators wanted to know everything, how much the restoration had cost, how long I’d had it, did I drive it all the time. There was one old gent in his 80s, accompanied by his daughter, who seemed transfixed with my engine (“is it a V8?”) and was nattering on about a Chevy he used to own.

Then came the awards ceremony. It turned out that 64SAINT had not only won First prize for the P1800/1800S group but it had also won joint Best in Show. I was bowled over, with a silly smile on my face.

And all too suddenly it was time to go home again. I had a flight to Russia in the morning the next day, so I couldn’t stay. There was another six and a half hour journey in front of me.

This time though I was not so lucky. I left at 3:30pm in brilliant hot sunshine, air-con blasting as much as it could, but three hours later the clouds had appeared, then thickened, then cracked with lightning. It poured down. My poor car: it hadn’t been in the rain for at least 6 years, since the restoration. No more cruising at 70mph, we slowed right down the spray was horrendous. At the first stop for gas (it had stopped raining, just), I’d covered 245 miles at 25.3 mpg. Soon after starting off again, the rain came back, and, a few miles later, my passenger side wiper blade broke off and clattered over the roof, only to be lost in the night. At that point, luckily, I was able to stop using the wipers (otherwise I’d have scored a scratch in the windshield) and rely on the air rushing over the windshield to keep it clear.

Next stop for gas was in Limon, 174 miles further on. 28 mpg this time, mainly because I wasn’t using the air-con any more. It was late. After another 76 miles I was back home again, at roughly 11pm. I’d covered 460 miles this time.

All in all, I had a ball, despite the rather rushed nature of it all (I’d have preferred coming back the Sunday, for sure). 64SAINT was the perfect car: no worries apart from the wiper blade. Next year? We’ll see. I certainly don’t want to drive to either the East or West Coast; in some sense, Kansas was the ideal place.

I’ve put up a bunch of photos of the event on Flickr.