In February, I decided to buy and try out a Surface Pro 3. I’d read reviews such as Hanselman’s where he recounted using one for a couple of months and liking it, and it seemed to me that it was possibly a good replacement to my nearly two-year-old Dell XPS 12. The one primary reason for upgrading was DevExpress’ release of their grid for Xamarin.Forms: I’d bought a MacBook Air 11 for demoing that on travels, and I needed a lighter ultrabook to demo everything else we do. (And before someone pipes up and says, buy a MacBook Pro, been there, done that, moved on. Also I need a touch screen, so there.) The Air is 2.2 lbs, the XPS 12 is 3.3 lbs, so a chunky 5.5 lbs to lug around at conferences and to the booth. Meh, to put it bluntly. The Surface Pro 3 with Type Cover, on the other hand, was 2.44 lbs: OK that’s more like it. 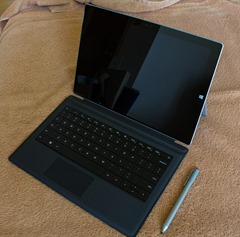 So I bought one at the end of February. Top of the line, 8GB RAM, 512GB SSD. For travel only and to take to Epicentral Coworking, where I go to get out of the house (I use a venerable, maxed-out, Dell XPS 15z for my main machine). A quick list of Pros and cons, if you’ll allow me:

2. It’s fast enough for my purposes.

3. The continuous kickstand is way, way, way better than the original one- or two-position versions. I cannot emphasize how much better it is.

4. The pen is magic, although I don’t really use OneNote (clicking the pen will start up OneNote automatically).

5. It runs everything I want it to run. Office, Visual Studio, videos, games, what have you. Works just fine in that respect.

6. Battery life, that I saw, was fine. Mind you, I tend to use it plugged in.

1. The trackpad. Mind you, I dislike trackpads anyway and use an external Arc mouse all the time.

2. The keyboard flexes too much for my style of typing. (Not ham-fisted per se, more ham-fingered.)

3a. One USB port. That’s high up on the right side. Since I use an external drive (backups and VMs) plus an external mouse, it means I have to have a hub. The whole thing then becomes unwieldy with this cable coming out of the machine about 6 inches in the air. Yes, I could buy/use a docking station, but I’m not going to be carrying that around with me when I travel.

4. It’s not a laptop. By this I mean that I’m working at my desk, I need something behind the machine, and I naturally half close the screen to get at it. Except it’s not a laptop and the machine just slams shut onto the keyboard. Ditto, using it anywhere but on a flat surface. Others report it’s fine in those scenarios; me, not so much.

So, as you can see, a list of minor annoyances, but enough to counter the benefits of the device for me. So, after a month of trying it out, I’ve decided to sell it (in fact, it’s gone) and get a Dell XPS 13 (2015 edition) instead. I’d ordered one for my wife when it was announced at CES, and it is a fantastic machine, more attuned to what I want from a portable Windows laptop. And it’s only 2.8 lbs, even with the high-resolution touch screen, so I’m still saving half a pound in weight. Now to sell the XPS 12: I’m becoming this wizard at selling electronics on eBay…

I'm setting up a Surface Pro 3 for our Build trip and what a PITA. It doesn't have a keyboard attachment or pen so that may contribute to the annoyance. But the biggest thing was battery life. It lasts, if you're lucky, 3-4 hours. For that, I'd rather have a MacBook Air with lots of memory, HD space, and Parallels. Otherwise, the new XPS you got looks very interesting too. Look forward to seeing it next week.